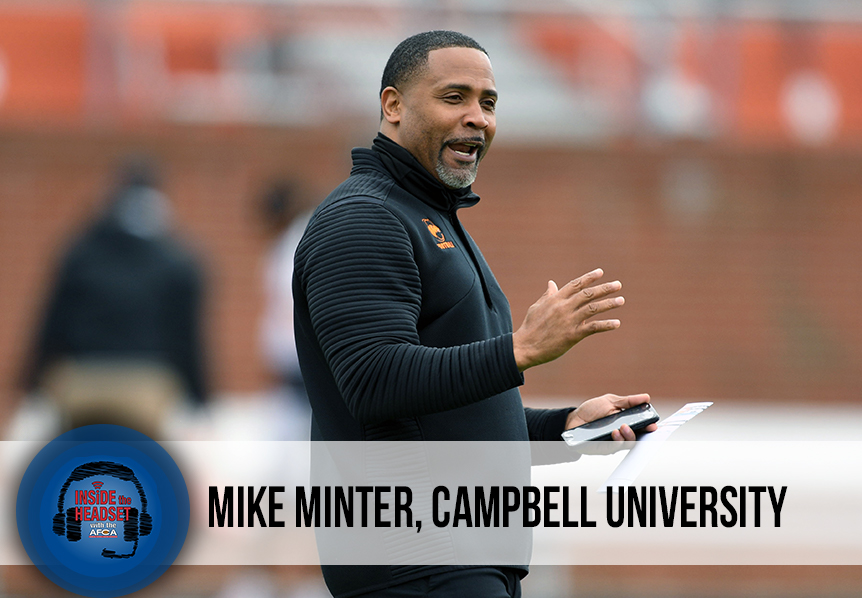 This week on Inside the Headset, we are featuring Campbell University Head Coach, Mike Minter. Coach Minter speaks on transitioning Campbell from a non-scholarship to scholarship program, details the commonalities of a great team that he’s found across various levels of football, and shares the impact that former coaches have had on his coaching career.

Mike Minter, a former Carolina Panthers standout and Nebraska Football Hall of Famer, is entering his 10th season as head football coach at Campbell University in 2022. Over the last nine seasons, the camels has reset nearly every record in the school’s books. Camels have been named first or second team all-conference 46 times, while 37 have been tabbed honorable mention all-league. Minter led the Camels to three consecutive winning seasons from 2017-19, a modern era program first (since 2008). During the team’s historic six game winning streak in 2019, Campbell received top-25 votes for five straight weeks, another program first.

Minter, a member of two national championship teams at Nebraska and the Panthers’ 2003 Super Bowl squad, joined the Fighting Camel program after serving as assistant coach at Liberty University in 2012 and Johnson C. Smith University in 2011. He also brought head coaching experience from First Assembly Christian School in Concord, where he guided his teams to 33 victories and two state titles in three seasons. During his 10-year NFL career, Minter earned a starting safety role six games into his rookie year in 1997, and held that position until he retired after the 2006 season. A second-round draft choice, he helped lead the Panthers to three playoff trips, the 2003 NFC Championship and a berth in Super Bowl XXXVII.