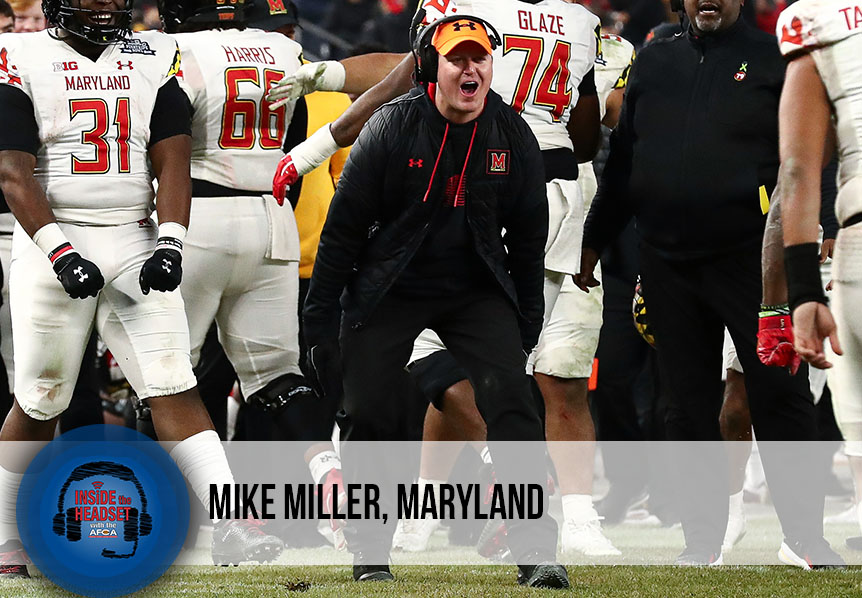 This week on Inside the Headset, we are featuring the Co-Offensive Coordinator and Tight Ends Coach at the University of Maryland, coach Mike Miller. Coach Miller discusses his time as a walk-on at UAB, the impact of his head coaches on his career path and some advice for how to be successful at such a young age in the profession.

Mike Miller has been the tight ends coach at Maryland for the past three seasons and will continue to serve in that position and as the co-offensive coordinator going into his fourth season. Under Coach Miller, as passing game coordinator, Maryland set five school records; 5,740 total yards, 3,960 passing yards, 339 completions, a 69.2 completion percentage, and 26 passing touchdowns tied school records.

Prior to coming to Maryland in 2019 Coach Miller worked at Alabama, 2017-2018, Charlotte Christian High School in North Carolina, 2016, and Clemson University 2015. Coach Miller started coaching in 2014 as a student coach at the University of Alabama-Birmingham after walking on and later earning a scholarship as one of the team’s quarterbacks.

1:45 Growing up in a football household

12:57 Transition from offense to defense

23:52 What steps did you take to be successful