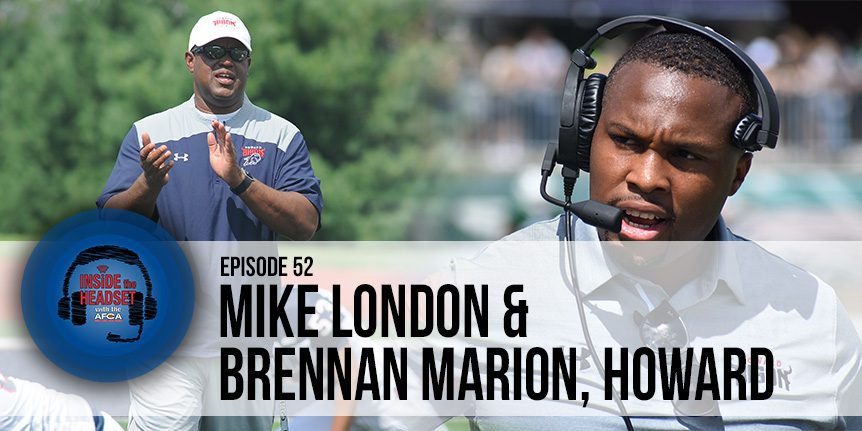 On this week’s episode of Inside the Headset we speak with Mike London, head coach at Howard University, and Brennan Marion, offensive coordinator at Howard University. Coach London discusses what he’s learned in his thirty years of coaching football, how he has gotten players to buy-in at Howard, and he shares a truly incredible story about his daughter, Ticynn. Later, Coach Marion discusses what he’s learned from Coach London, how he became the OC for the Bison, and changes he wants to make in his second season running the offense.

You can follow Mike London on Twitter. Additionally, here is a link to the Andy Talley Bone Marrow Foundation.

Brennan Marion was named the offensive coordinator for Howard University prior to the 2017 season. His first coaching position was at West Valley College (CA) as a strength coach, and in 2012 he worked as a position coach at The Harker School (CA). Coach Marion was named the head coach of Saint Patrick Saint Vincent (CA) in 2013, and he was able to lead the program to the playoffs after they had gone 1-9 in the season prior to his arrival. In 2014 he was named head coach of Waynesboro HS (PA), and he led the team to its first winning season in over twenty years.