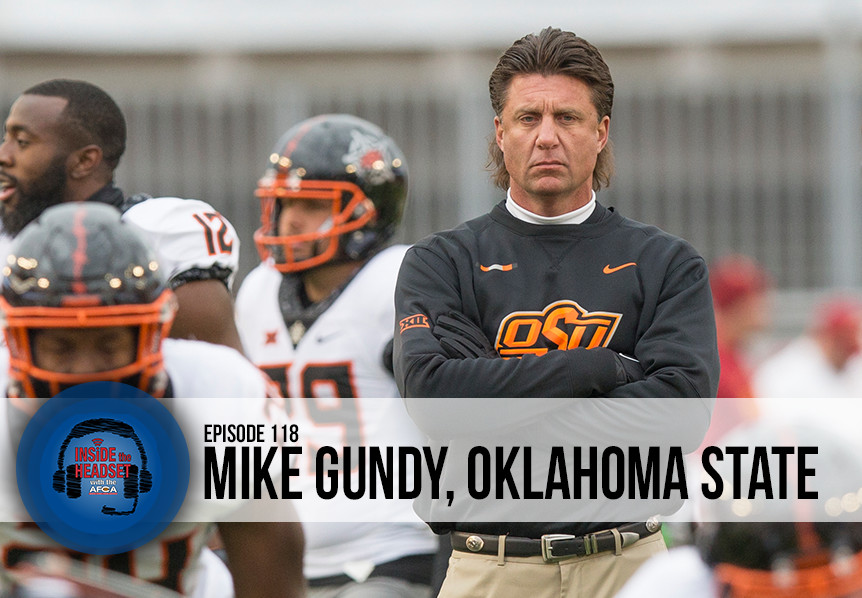 This week on Inside The Headset we are featuring Oklahoma State Head Coach, Mike Gundy’s general session speech from the 2017 AFCA Convention in Nashville, Tennessee. Coach Gundy shares how he got into coaching at Oklahoma State, how he keeps his players fresh all season long, and how his staff builds credibility with his players.

Mike Gundy immediately joined the Oklahoma State football staff after graduating from OSU. He coached the receivers (1990), the quarterbacks (1991-93, 1995), and served as offensive coordinator during the 1994 season in the final year for Gundy’s college coach, Pat Jones. Gundy coached in Stillwater under each of the three previous Cowboy head coaches (Jones, Bob Simmons and Les Miles). He spent one season at Baylor (1996) as quarterbacks coach and passing game coordinator before heading to the ACC, where he coached at Maryland (1997-00). He returned to Stillwater in 2001 as assistant head coach and offensive coordinator, while also coaching the OSU quarterbacks. In the last decade, Gundy has led OSU to six seasons with at least 10 wins, an outright Big 12 title (2011) and a share of the Big 12 South title (2010).