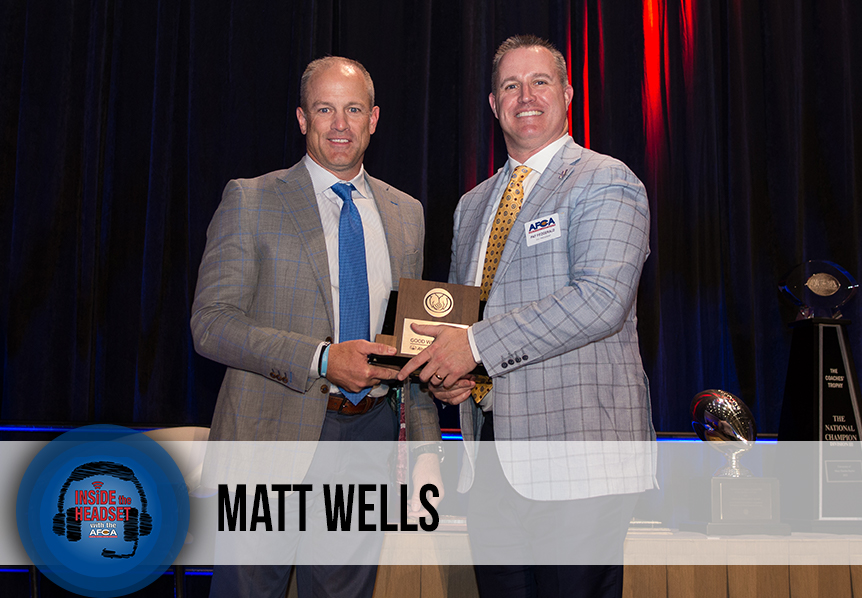 This week on Inside the Headset, we are featuring Former Utah State and Texas Tech Head Coach, Matt Wells. In this episode, Coach Wells shares his past experience coaching his alma mater at Utah State, highlights the importance of getting players involved in the local community, and shares what being a part of the Allstate AFCA Good Works team has meant to him.

Matt Wells was named the honorary coach for the Allstate Good Works Team this past year. Coach Wells was most recently the head coach for the Texas Tech Red Raiders from 2019-2021. Beginning with his arrival at Texas Tech, Wells stressed the importance of building a positive, player-driven culture within the football program. He described it as having a “We, Us and Our” mentality, meaning it takes every individual, inside and outside of the program, to contribute for the Red Raiders to be successful on Saturday. That motto applied to the Red Raiders’ work in the community as well as the Texas Tech football program committed countless hours to various non-profit organizations and local school districts over his tenure. During the 2020-21 academic year alone, the Red Raiders combined for more than 1,200 hours of community service, serving organizations such as the local YWCA, the South Plains Food Bank, Ronald McDonald House, Boys and Girls Club of Lubbock and Habitat for Humanity, among others.

Prior to Tech, Wells was the head coach for his alma mater at Utah State, following two seasons as an assistant coach on staff. Utah State experienced its best stretch in history during Wells’ tenure as the Aggies won 44 games and played in five bowl games under his guidance, quite the feat for a program that had only eight postseason trips to its record prior to his promotion. Wells, the fourth-longest tenured coach in program history, departed Utah State as the only coach to lead the Aggies to at least three bowl games as well as multiple bowl victories. In fact, Wells was a player (1993), a coordinator (2012) or the head coach (2013-14) for four of Utah State’s five bowl wins in its history. Wells closed his tenure in Logan as the second-winningest coach in program history with 44 victories. Wells has also had coaching stops at New Mexico, Louisville, Tulsa, and Navy.