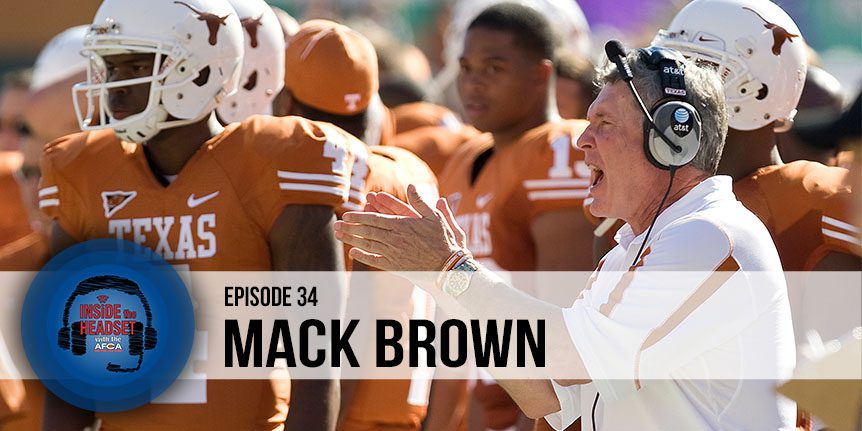 On this episode of Inside the Headset, we take a road trip to Austin, Texas, to speak with Mack Brown, legendary former head coach for the University of Texas Longhorns.

Coach Brown’s career began as a student assistant at Florida State (1973-74), and his first full-time position was coaching receivers at Southern Mississippi (1975-77). He also coached receivers at Memphis (1978) and Iowa State (1979-1981) before being named offensive coordinator for the Cyclones. Coach Brown worked with quarterbacks at LSU (1982), was the head coach at Appalachian State (1983), offensive coordinator at Oklahoma (1984), and head coach at Tulane (1985-87). In 1988, Coach Brown took over the UNC football program and built it into a competitor, staying with the Tar Heels until 1997. Brown was named head football coach of the University of Texas in 1998 and led the Longhorns to National Championship appearances for the 2005 and 2009 seasons; the Longhorns’ victory over USC at the 2006 Rose Bowl earned the program’s first national championship in 35 years. He retired from coaching in 2013 and now works for ESPN as a football commentator and analyst.