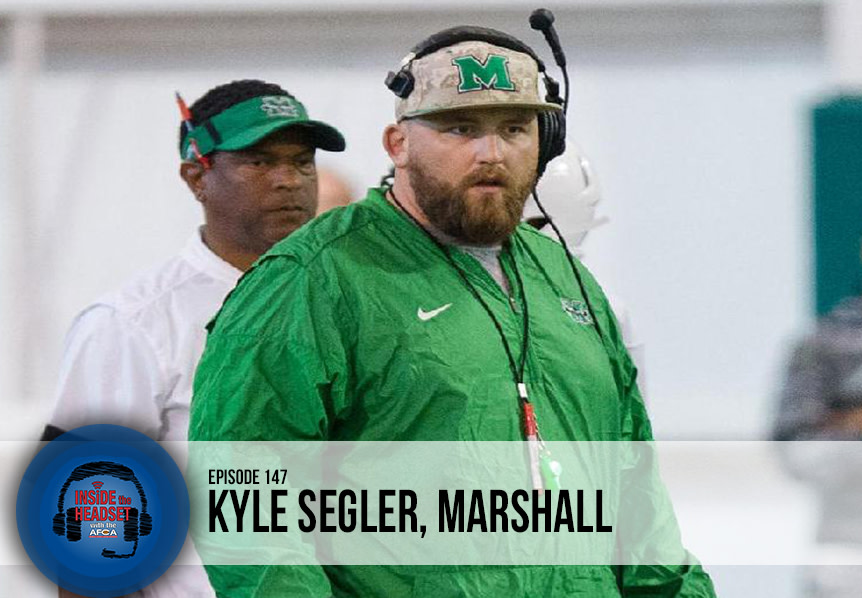 This week on Inside the Headset, we are featuring Marshall University Tight Ends Coach and Co-Special Teams Coordinator, Kyle Segler. Coach Segler shares his unique coaching journey, discusses the opportunity to become a special teams coordinator, and highlights the significance of the AFCA 35 Under 35 program.

He joined the staff in Huntington after coaching at ULM, where he was the tight ends coach and special teams coordinator for one season. Segler’s special teams units were some of the best in the Sun Belt Conference, sporting net kickoff and punt return averages that ranked in the top 20 nationally.

Prior to that, Segler was an assistant coach at Sam Houston State for eight seasons, where he coached the offensive line and tight ends. In 2016, he added the duties of special teams coach. Here, Segler’s offensive linemen paved the way for a unit that broke 35 school records. He also helped develop four All-Americans.

Prior to returning to his alma mater, he spent the 2009 season coaching at Lon Morris College in Jacksonville, Texas, helping relaunch a football program that was discontinued in 1945.

Segler was an offensive lineman on Sam Houston’s team that won a share of the Southland regular-season title, advanced to the FCS semifinals and finished 11-3. He earned two degrees from Sam Houston, receiving his Bachelor’s in kinesiology in 2006 and his Master’s in sports management in 2010.