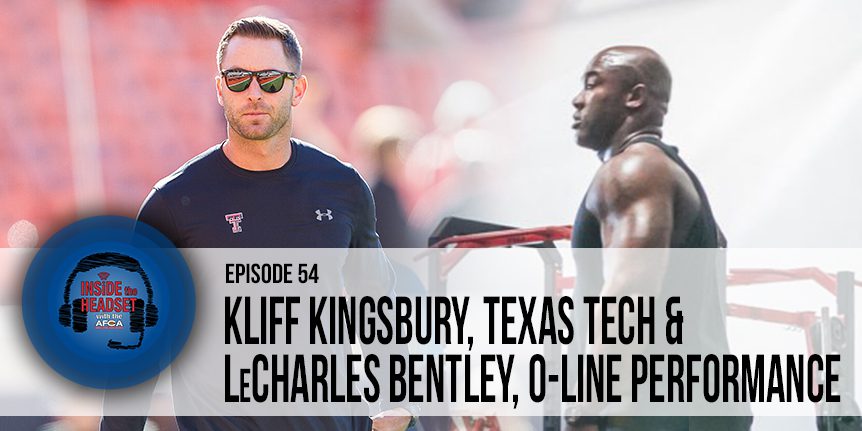 On this week’s episode of Inside the Headset, we speak with Texas Tech Head Coach Kliff Kingsbury, and LeCharles Bentley, founder of L.Bentley O-Line Performance (OLP). We spoke with Coach Kingsbury prior to the season about his daily schedule, how the Air Raid has evolved since his playing days, and how he got into coaching. With LeCharles Bentley, we discuss his motivation to create his training club and his philosophy on offensive line play and development.

Kliff Kingsbury began coaching after playing quarterback professionally for five seasons. He got his start as the offensive quality control coach at the University of Houston (2008-2009), and he was later promoted to co-offensive coordinator and quarterbacks coach (2010-2011). In 2012, he followed Houston’s Head Coach Kevin Sumlin to Texas A&M University and served as the offensive coordinator and quarterbacks coach. Kingsbury, who played quarterback at Texas Tech from 1998 to 2002, was named the head coach of the Red Raiders in 2013.

LeCharles Bentley played collegiately at Ohio State University (1998-2001) before being drafted by the New Orleans Saints in the second round of the 2002 NFL draft. A two-time Pro-Bowler, he signed with the Cleveland Browns in 2006, but a knee injury sustained prior to the season would eventually cause him to retire. In 2008, he created L.Bentley O-Line Performance in Ohio (now located in Chandler, Arizona), and he works as a trainer for some of the premier offensive linemen in the NFL. Bentley is also the author of Building the Block and Rebuilt to Dominate.