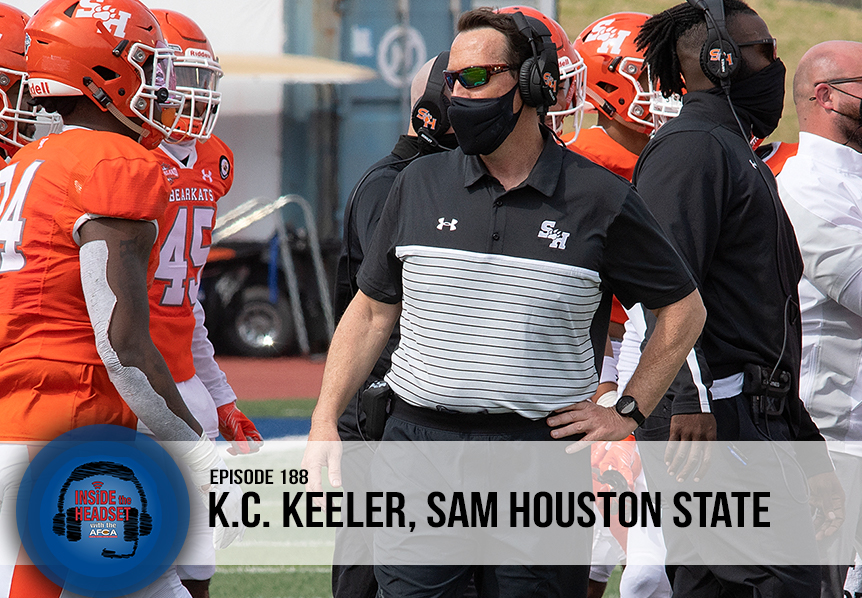 This week on Inside the Headset, we are featuring current FCS National Champion and Sam Houston State University Head Coach, K.C. Keeler. Coach Keeler shares the importance of viewing obstacles as opportunities, discusses implementing newfound techniques, and highlights the significance of developing relationships through football.

K.C. Keeler recently completed his seventh season as head coach of the Sam Houston State University Bearkats, capping it off with an FCS National Championship. Faced with a season full of adversity, the Bearkats overcame numerous challenges to win the national title under Keeler’s direction. Prior to taking over at SHSU, Keeler spent time as the head coach at Delaware, which is his alma mater, from 2002-2012. His Fightin’ Blue Hens won the FCS national championship in 2003 and reached the national championship game in 2007 and 2010. Before Delaware, Keeler produced an 88-21-1 record at Rowan University (1993-2001). This coaching stint, in Glassboro, N.J., included seven NCAA Division III playoff appearances including five trips to the National Championship game. Keeler began his coaching career as an assistant at Amherst College in 1981 before moving to Rowan University in 1986, where he was later named head coach in 1993.