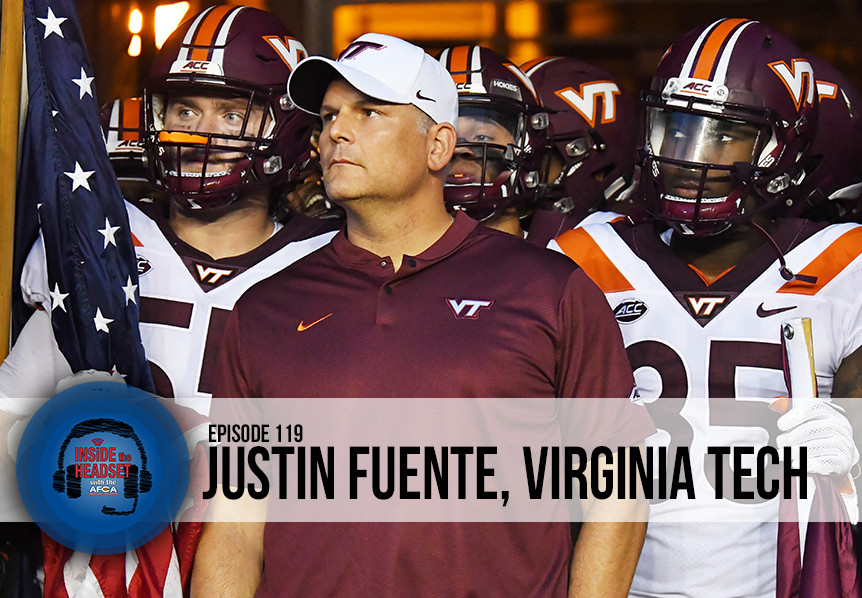 This week on Inside the Headset we are featuring Virginia Tech Head Coach, Justin Fuente’s general session speech from the 2017 AFCA Convention in Nashville, Tennessee. Coach Fuente shares the importance of developing your players on and off the field, the crucial role of strong leadership on your team, and what it means to be committed rather than involved.

Justin Fuente was named Virginia Tech’s head coach in November of 2015, after a monumental resurrection of the football program at the University of Memphis (2012-15). In his final two seasons at Memphis, Fuente compiled a 19-6 record, guiding the Tigers to back-to-back bowl berths after inheriting a program that went 5-31 in three years before his arrival. Prior to Memphis, Fuente was the Co-Offensive Coordinator/Quarterbacks Coach (2009-11) and Running Backs Coach (2007-08) at Texas Christian University. During his final three seasons as play-caller, QBs Coach and Co-Offensive Coordinator at TCU, the Horned Frogs produced a 36-3 overall record and went on a 24-game win streak in the Mountain West Conference. Fuente began his coaching career at Illinois State, initially holding the position of Quarterbacks Coach (2001-03) and then getting promoted to Offensive Coordinator/Quarterbacks Coach in 2004.