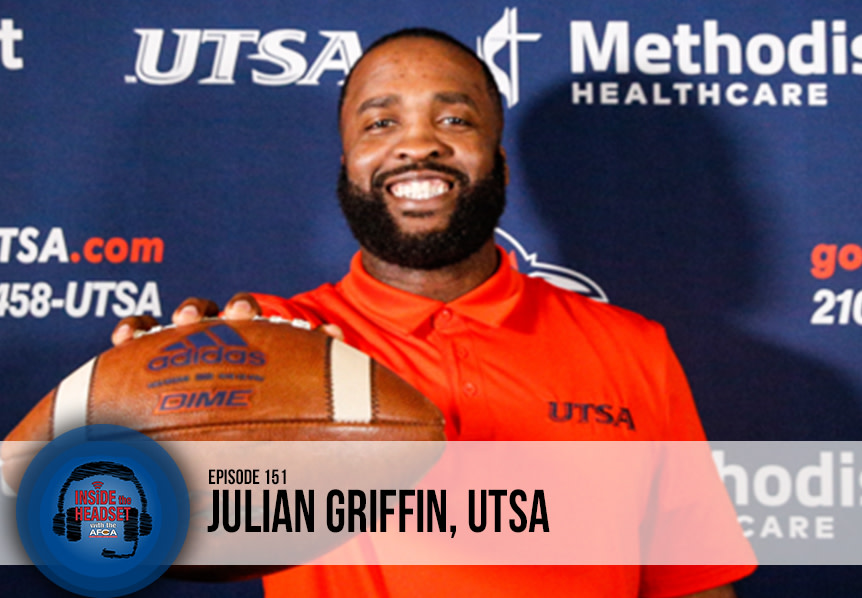 This week on Inside the Headset, we are featuring UTSA Running Backs Coach, Julian Griffin. Coach Griffin shares his unique start into the coaching profession, discusses key takeaways from coaching at lower levels, and explains the importance of preparing for new roles.

Julian Griffin was named the running backs coach at UTSA on Dec. 11, 2019. Griffin joined the UTSA coaching staff after serving as the offensive quality control assistant for two seasons at Arkansas. Prior to Arkansas, Griffin was an offensive quality control assistant at SMU for the 2017 season, where he helped the Mustangs offense rank in the top 20 nationally in several offensive categories. In 2016, Griffin was the wide receivers coach/special teams coordinator at Central Methodist (Mo.). Additionally, Griffin was an offensive graduate assistant at ULM, his alma mater, in 2015. Prior to his time at ULM, Griffin served a two-year stint as the running backs coach at Texas A&M-Kingsville.

Coach Griffin played wide receiver collegiately for ULM from 2008-12 after a standout prep career at Gladewater High School. After college ball, he went on to earn tryouts with the Edmonton Eskimos, Toronto Argonauts, and Hamilton Tiger-Cats of the CFL.