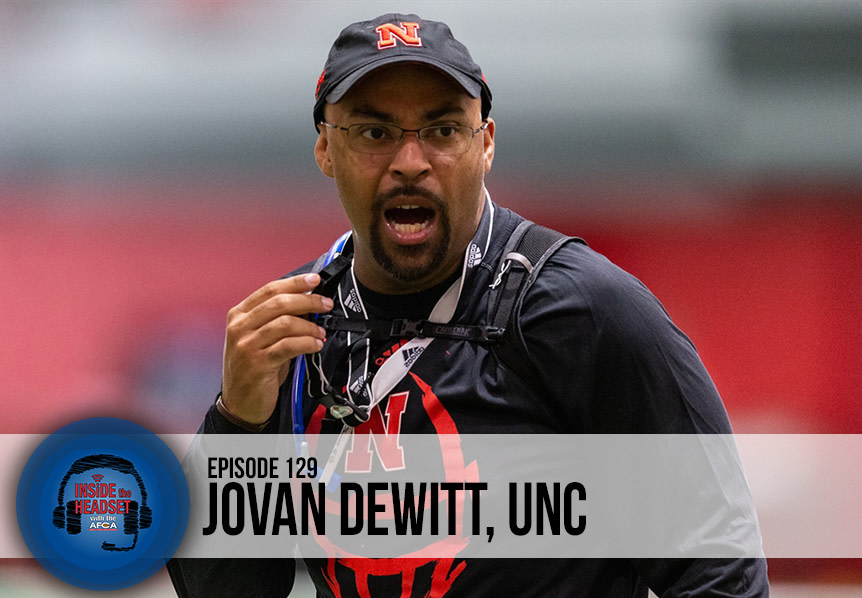 This week on Inside the Headset, we are featuring the University of North Carolina Special Teams Coordinator and Outside Linebackers Coach, Jovan Dewitt. Coach Dewitt discusses the importance of seeking different perspectives, his unexpected battle with cancer, and the significance of meaningful relationships.

Jovan Dewitt, a 21-year veteran of collegiate coaching, joined the North Carolina football staff this past January. Dewitt joined Mack Brown’s staff after a two-year stint as special teams coordinator and outside linebackers coach at Nebraska (2018-20). Dewitt also coached with Scott Frost at both Central Florida (2016-18) and Northern Iowa (2009-11). In just two seasons, Dewitt helped UCF improve their scoring defense ranking by 65 spots, as they went from allowing 37.7 points per game in 2015 to 25.3 points per game in 2017. Dewitt’s linebackers also played a role in UCF ranking third nationally with 58 combined takeaways in the 2016 and 2017 seasons.

Before joining Frost’s staff in Orlando, Dewitt was the special teams coordinator and linebackers coach at Army West Point in 2014 and 2015. As special teams coordinator, Dewitt helped the Black Knights combine for seven blocked kicks in his two seasons. Dewitt has been a part of several top defenses in his career, including coordinating a Florida Atlantic unit that ranked 11th nationally in total defense in 2013. Coach Dewitt also has coaching stops as defensive coordinator at St. Norbert (2006-08), defensive coordinator at Northern Michigan (2004-06), special teams coach at Fairmont State (2003-04), assistant coach at Fort Scott Community College (2002-03), and graduate assistant, running backs coach, and defensive line coach at Northern Michigan (1997, 2000-01).