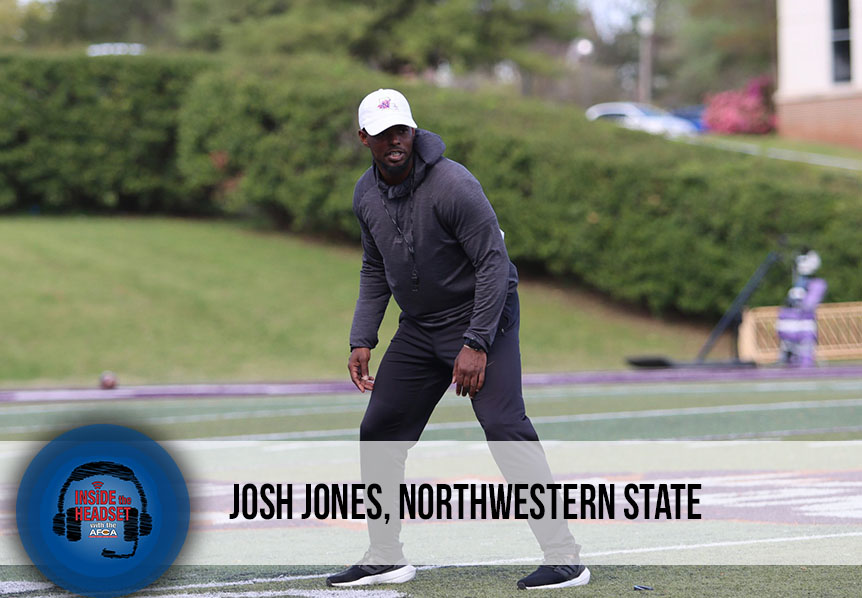 This week on Inside the Headset, we are featuring Northwestern State’s safeties coach and recruiting coordinator, Josh Jones. Coach Jones talks about chasing knowledge of the game, shares his experience recruiting in the heart of high school football, and discusses what it’s like being a member of the AFCA’s 35Under35 Institute.

Josh Jones is the safeties coach and recruiting coordinator at Northwestern State. Coach Jones began his coaching career as a GA at three schools, Arkansas Tech, Troy, and Missouri Western University. Following his graduate assistantships, Coach Jones became the cornerbacks coach at Henderson State. Coach Jones then spent two years on staff with the UCA Bears before going to Central Arkansas and following head coach Steven Campbell to South Alabama. Coach Jones then spent a season at Arkansas- Pine Bluff before coming to Northwestern State where he has been for three years.

Coach Jones has accumulated many prestigious awards as a player and a coach. This includes developing a first-team All-SWAC player and the most number of interceptions in the NCAA in 2015. Coach Jones broke school records and attended the Cactus Bowl as a player.

[15:06] Recruiting in the Heart of High School Football