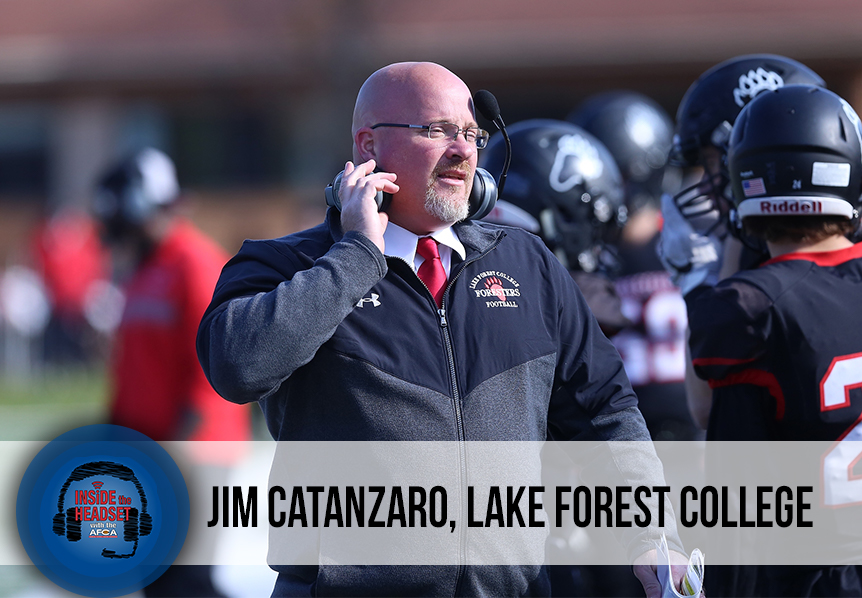 This week on Inside the Headset, we are featuring Lake Forest College Head Coach, Jim Catanzaro. In this episode, Coach Catanzaro details the value of recruiting multi-sport athletes out of high school, highlights his personal coaching philosophy, and shares the impact that the transfer portal has had at the Division III level.

Jim Catanzaro will be entering his 14th season as the Foresters’ head coach and 16th season with the program overall. In addition to being the head coach, Catanzaro also serves as the teams offensive coordinator and was named the Athletic Director of Lake Forest in July of 2021. A two-time Liberty Mutual Coach of the Year finalist and Midwest Conference Coach of the Year winner (2012), Catanzaro was the first coach in program history to lead to Foresters’ to the NCAA D-III playoffs (2020,2021). Coach Catanzaro has lead his players to 115 All-MWC selections as head coach and defensive players to 68 honors since joining the staff. The Foresters have broken or tied team records 124 times in the last 12 years.

Catanzaro came to Lake Forest from NCAA Division II Wingate University, where he was the defensive line coach for three seasons and was part of the South Atlantic Conference Coaching Staff of the Year in 2004. Prior to his time at Wingate, Catanzaro was the defensive line coach, recruiting coordinator, and head strength coach for three seasons at Glenville State College. The Pioneers claimed the West Virginia Intercollegiate Athletic Conference title in 2001 and he was a member of that year’s WVIAC Coaching Staff of the Year. At the national level Catanzaro has served on the NCAA Division III Football Committee since 2016 and as a Regional Advisory Committee member since 2014. In 2019 he was appointed as one of two NCAA Division III members to the American Football Coaches Association (AFCA) Board of Trustees.