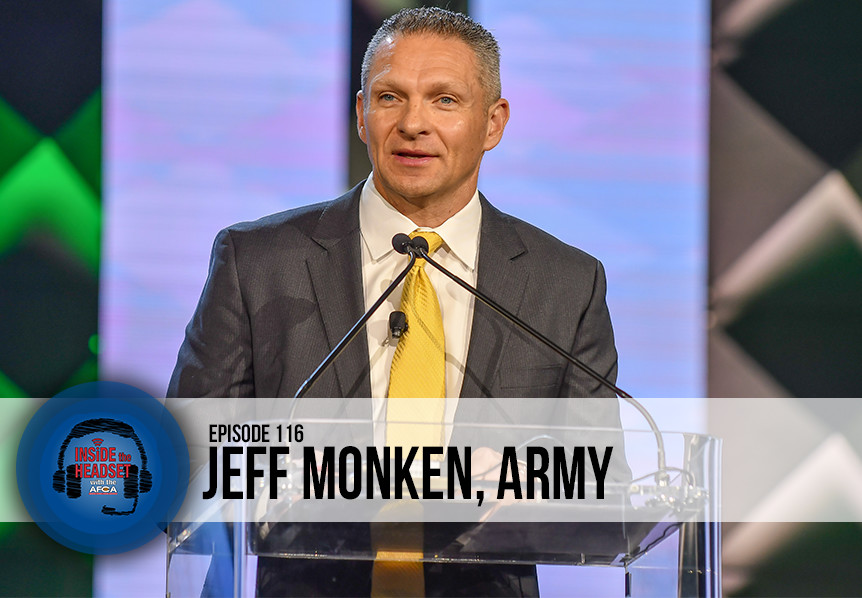 This week on Inside The Headset we have a special two part episode in honor fo the Army Navy game this up coming weekend. Part one features Army Head Coach, Jeff Monken’s general session speech from the 2018 AFCA Convention in Charlotte, North Carolina. Coach Monken Shares how he got his start in college coaching, his experience as a first-time head coach, and the 7 commandments of winning football games.

Jeff Monken heads into his sixth season at the helm of Army West Point football in 2019 after being named the 37th individual head coach in program history on Dec. 24, 2013. Coach Monken started his coaching career as a Graduate Assistant (1989-1990) at the University of Hawai’i and Arizona State (1991). From there he was spent time as the Wide Receiver/Tight Ends coach at Buffalo (1992-1994) before getting his first head coaching job at Morton (IL) High School (1995). After one season Coach Monken was the offensive line coach at Concordia (IL) (1996), the Slotbacks coach at Georgia Southern (1997-2001),  Slotbacks/Special Teams coach at Navy (2002-2007), Slotbacks/Special Teams coach at Georgia Tech (2008-2009). He got his first collegiate head coach job when he returned to Georiga Southern (2010-2013) before taking over the Army Program in 2014.