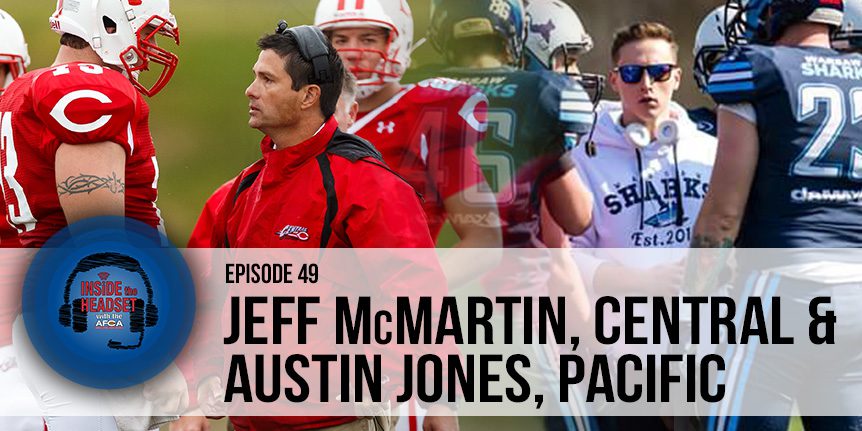 On this week’s episode of Inside the Headset we speak with Jeff McMartin, head coach at Central College, and Austin Jones, assistant wide receivers coach at Pacific University. Coach McMartin discusses becoming the head coach at his alma mater, his experiences as a collegiate track head coach, and taking his team overseas to play in Europe every three years. Coach Jones shares about his time as the head coach of Warsaw Sharks in Poland, adjusting to culture shock, and what it’s like coaching in a professional league where players didn’t grow up around the game of football.

Jeff McMartin’s coaching career began as a graduate assistant at Wake Forest (1990-1991), and his first full-time position was coaching the defensive line at Illinois Wesleyan (1992-1993). After spending a season coaching the defensive line at the University of Rochester (1994), he joined the staff at Beloit College where he coached the offensive line and special teams for five seasons (1995-1999). Coach McMartin was the offensive coordinator and offensive line coach at DePauw University for four seasons (2000-2003) prior to being named the head coach at Central College in 2004. He is entering his 15th season leading the Dutch.

Austin Jones’ coaching career began as an assistant with Southern Oregon University in early 2013, then he joined Portland State University for the 2013 season as a video coordinator and defensive quality control coach. After coaching linebackers at West Albany (Ore.) HS for two seasons (2014-2015), Coach Jones traveled abroad to join the Green Ducks Radom of the Polish League of American Football as the defensive coordinator (2016). He went on to be named the head coach of the Warsaw Sharks (Poland) and led the team for two seasons (2017-18) prior to returning to the states to join Pacific University’s staff as an assistant wide receivers coach.