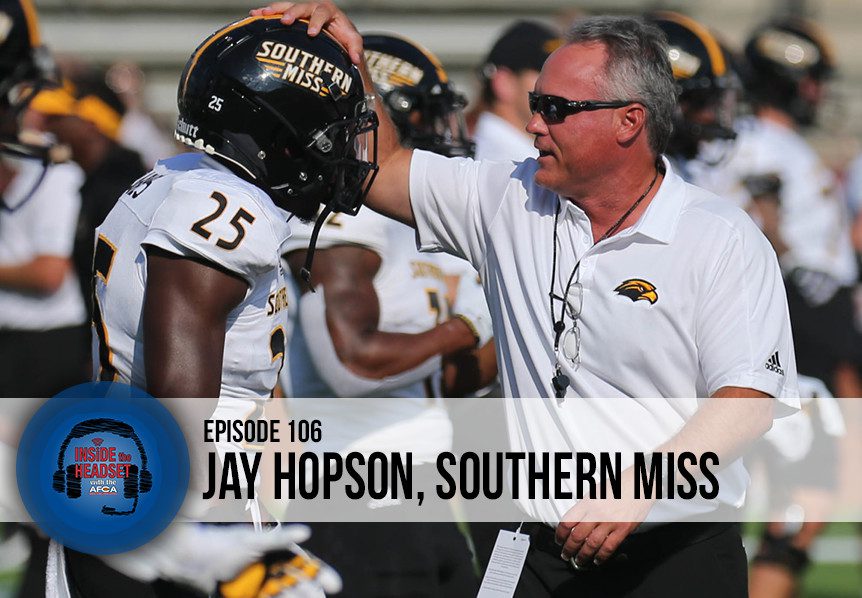 This week on Inside the Headset we speak with Jay Hopson, Head Coach for the University of Southern Mississippi. We discuss coaching at all different levels of college football, and he gives advice for young coaches.

Coach Hopson’s career began as a graduate assistant for Tulane in 1992. From there, he coached defensive backs at Delta State (1993), and was a graduate assistant for LSU (1994) and Florida (1995) before landing at Marshall coaching the defensive backs (1996-2000). In 2001, Coach Hopson joined the Southern Mississippi staff to work in the secondary (2001-2003). He spent the 2004 season as the defensive backs coach and recruiting coordinator at Ole Miss before returning to the Golden Eagles in 2005 as their defensive coordinator (2005-2007). Hopson served as the linebackers coach at Michigan (2008-2009) and defensive coordinator at Memphis (2010-2011) prior to accepting his first head coaching position at Alcorn State (2012-2015). In 2016, Hopson was named head coach for the University of Southern Mississippi.