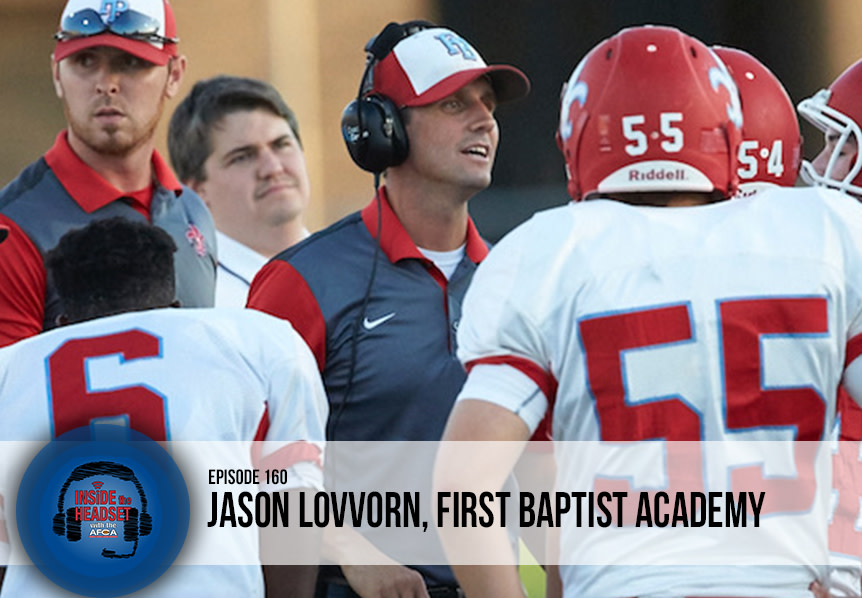 This week on Inside the Headset we are featuring First Baptist Academy Head Coach Jason Lovvorn. Coach Lovvorn shares his view on creating player buy-in, offers insight on serving as the Head of School, and highlights the significance of developing relationships through the AFCA 35 Under 35 program.

Jason Lovvorn joined the FBA staff in 2008 after graduating with a Bachelor’s degree in Business Administration from Baylor University. He was named the Head Football Coach at FBA in 2009, Athletic Director in 2010, and Dean of Students in 2011. In 2013, Coach Lovvorn and the FBA Saints won the TAPPS Division III State Championship, capping a perfect season. Following that season, in 2014, Lovvorn was named Head of School.

Coach Lovvorn was also named a member of the 2018 AFCA 35 Under 35 Coaches Leadership Institute, which featured a curriculum of interactive lectures focused on topics specifically tailored to emphasize leadership in the coaching profession, ethics, influential responsibilities, career progression, and family balance. Additionally, Coach Lovvorn served as a speaker and field coach during the Skills and Drills sessions at the 2020 AFCA convention.

It is the quintessential casino game and in fact modern games of chance are believed to have started with card games. Its popularity is such that countless online casinos have been generated that exclusively offer gambling rooms dedicated to poker in all its versions, which are not few.

Lovvorn played college football for three years at Baylor University and one year at Howard Payne University. An FBA alumnus, Coach Lovvorn has a passion to help FBA students strive for excellence academically, athletically, and most importantly, spiritually.