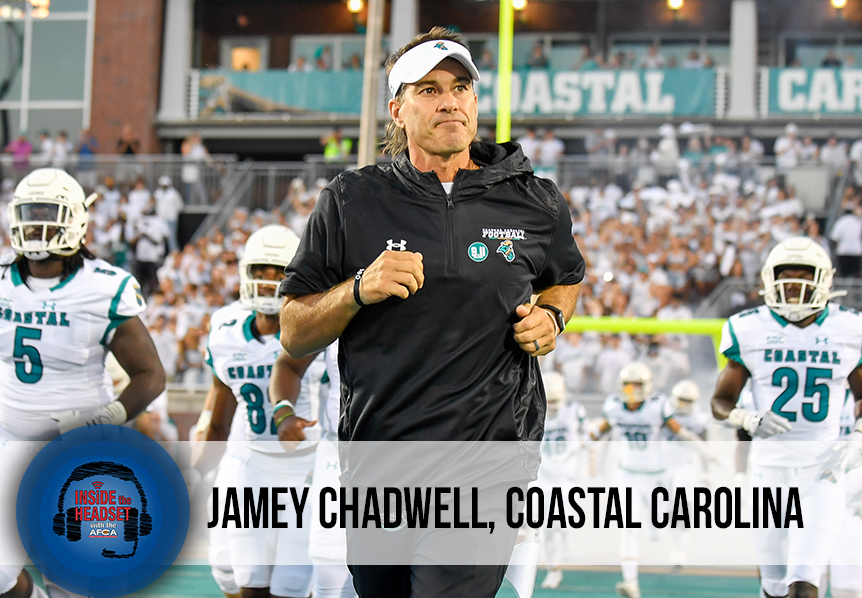 This week on Inside the Headset, we are featuring Coastal Carolina Head Coach, Jamey Chadwell. In this episode, Coach Chadwell talks maintaining success with increasing public expectations, details the value in keeping a coaching staff intact, and shares how he approaches recruiting and roster management in the transfer portal era.

Jamey Chadwell is entering his fourth season as the Head Coach of the Coastal Carolina Chanticleers. In just three seasons, Chadwell has built Coastal into one of the best teams in the Sunbelt Conference with back-to-back 10+ win seasons and a conference title in 2020. The 2020 season marked Coastal Carolina’s first-ever undefeated regular season and the first time that the Chanticleers were ranked in either the Associated Press Top 25 Poll or the AFCA Coaches Poll. Due to his success in the 2020 season, Chadwell racked up over 10 coach of the year honors including the AFCA FBS Region 2 Coach of the Year and Sun Belt Football Coach of the Year.

Prior to taking over as the head coach of the Chanticleers, Chadwell served as the offensive coordinator and quarterbacks coach for Coastal Carolina. Chadwell came to Coastal after four seasons as the head coach at Charleston Southern. He was named Big South Coach of the Year three times (2013, 2015, and 2016), led CSU to conference titles in 2015 and 2016, and guided the Buccaneers to the NCAA Division I FCS Championship Playoffs in both of his last two years. Chadwell, a former Buccaneer assistant coach, returned to CSU after head coaching stops at Delta State, going 3-8 in his lone season (2012), and North Greenville, going 22-14 in three seasons (2009-11).