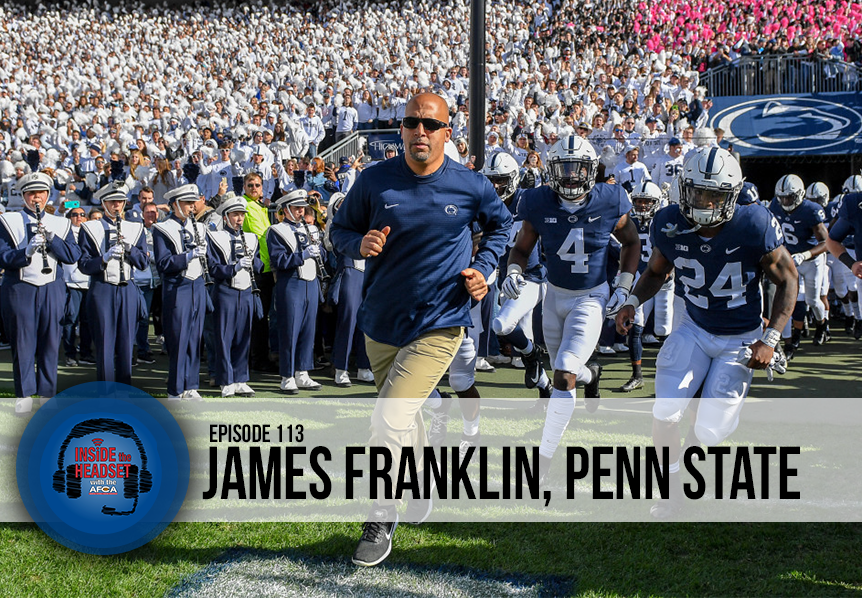 This week on Inside the Headset we speak with James Franklin, Head Coach for Penn State University. We discuss his passion for developing coaches, the importance of relationships, and his path to becoming Head Coach of the Nittany Lions.

Coach Franklin began his coaching career at Kutztown University as a wide receivers coach in 1995 before returning to his alma mater East Stroudsburg as the defensive backs coach for the 1996 season. He then spent time on staff at James Madison (1999), Washington State (1998), and Idaho State (1999) before becoming the wide receivers coach and recruiting coordinator for Maryland (2000-2004). Franklin spent the 2005 in the NFL coaching the receivers for the Green Bay Packers. Coach Franklin then returned to the collegiate level as the offensive coordinator and quarterbacks coach for Kansas State (2006-2007). After a return to Maryland as the Assistant Head Coach and OC (2008-2010), Franklin was named Head Coach for Vanderbilt (2011-2013) and posted back to back 9 win seasons with the Commodores. In January of 2014, Franklin was named Head Coach of the Penn State Nittany Lions, and led the program to a 2016 Big Ten Championship.