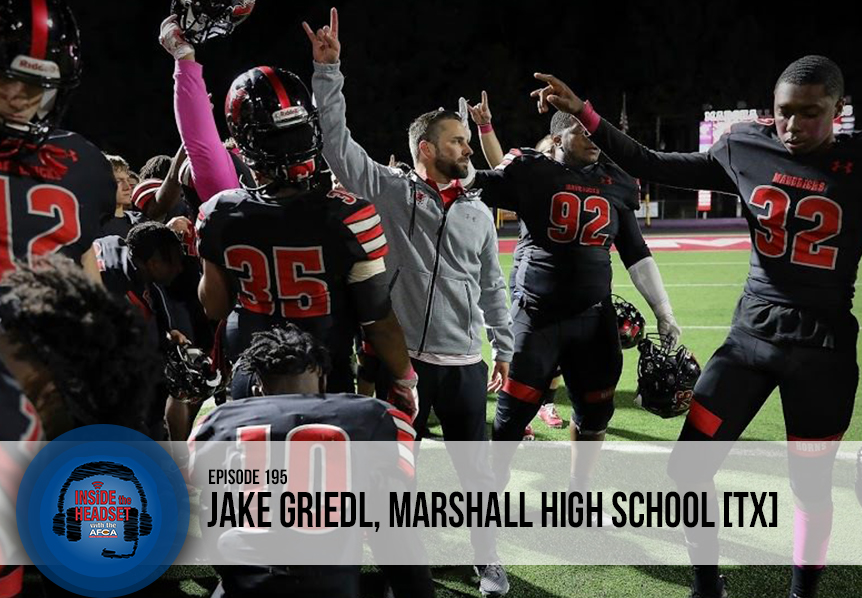 This week on Inside the Headset, we are featuring Marshall High School (TX) Head Coach, Jake Griedl. Coach Griedl discusses the importance of investing time in your athletes, speaks on the challenges of coaching at historically good programs, and gives advice to young coaches who aspire to advance in the coaching ranks.

Jake Griedl is entering his third season as the Head Coach for Marshall High School. Griedl came to Marshall in the spring of 2017 serving as the Offensive Coordinator. At Marshall, Griedl coordinated an offense that ultimately set program season records for points scored and total yards in 2018, as the Mavs won a second straight district championship and went three rounds deep in the playoffs. In seven years as a high school assistant coach, Griedl has worked with teams that have won six district championships and he has coached in a total of 24 playoff games in those seven seasons. Prior to Marshall, Griedl served as the wide receivers coach at Class 6A powerhouse Lake Travis from 2013-2016. Griedl’s time at Lake Travis culminated in 2016 with the Class 6A state championship.

Prior to Lake Travis, Griedl coached wide receivers at Boerne High School in 2012-2013. His first coaching job came at the collegiate level in 2011-2012, when he served as wide receivers coach/return specialist coach as a graduate assistant at Southern Arkansas University. Griedl received a B.A. in History from Concordia University-Nebraska in 2012, where he was a three-year starter and team captain at slot receiver. In 2021 Coach Griedl was named to the AFCA 35 Under 35 class.