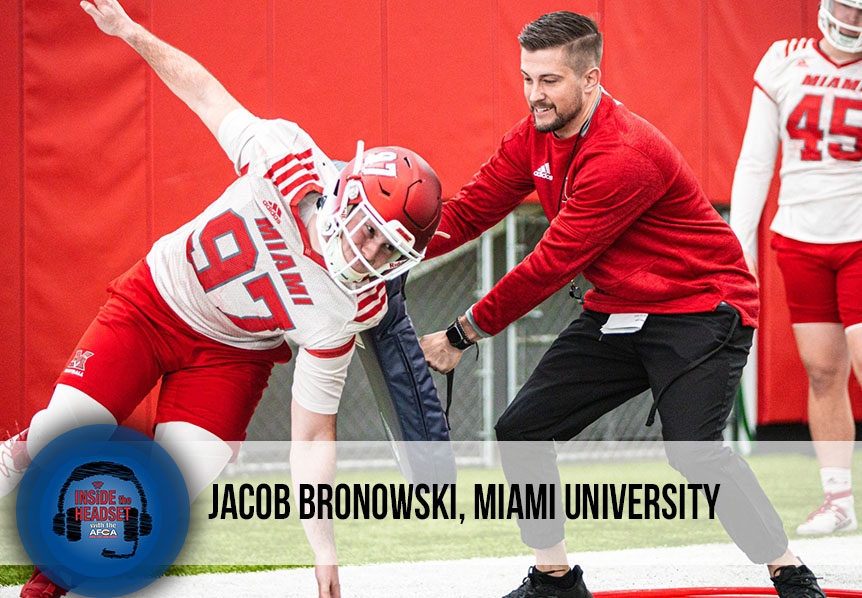 This week on Inside the Headset we are featuring Miami University Ohio’s Special Teams Coordinator, Jacob Bronowksi.
Coach Bronowski talks about his journey to special teams coordinator, how he adjusts for close games, and how he navigates being a great coach and a great family man.

Coach Bronowski is in his first season at Miami (OH) University as the Special Teams coordinator. Coach Bronowski has also had stops at Tennessee, UCF, and Robert Morris. He got his start in coaching in 2017 as a special teams graduate assistant at his alma mater at the University of New Mexico. He played quarterback at UNM (2013) and also spent time as a special teams student assistant with the Lobos in 2014-16 before completing his degree in liberal arts in 2016.

0:47 When did you know that you wanted to coach? + Start in coaching

6:36 How did not having previous knowledge of special teams impact your career?

8:41 When did you become responsible for all four phases of the special teams?

12:00 What do you implement to try and win when games are close at the end of the fourth quarter?