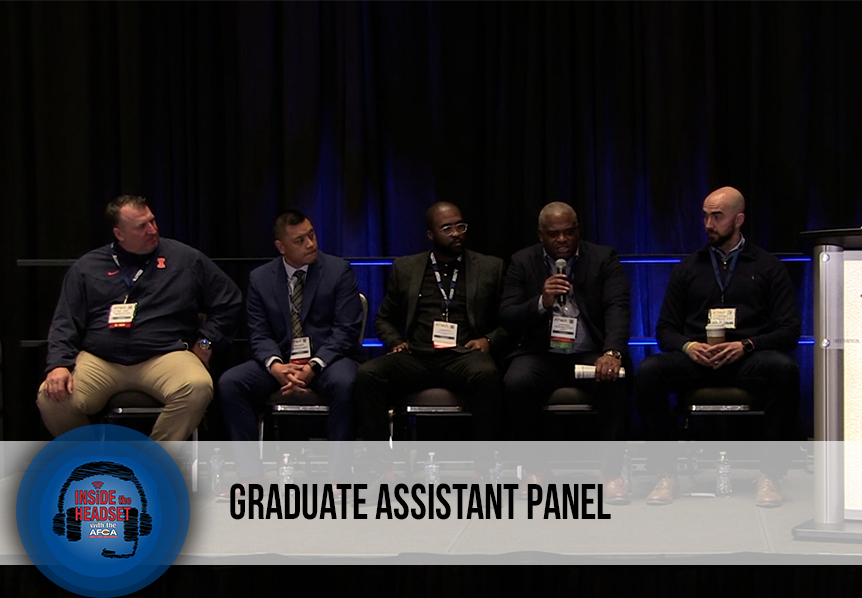 This week on Inside the Headset, we are featuring our GA panel from the 2022 AFCA convention. The panelists discuss what they look for in a GA, how to be successful, and maintaining discipline through adversity. Our speakers included Bret Bielema, Sean Lewis, Ryan Riemedio, Dr. Alvin Parker, and Julian Griffin.

Bret Bielema recently completed his second season as the Head Coach of Illinois. Bielema arrived in Champaign with 24 years of collegiate coaching experience and a 12-year record of 97-58 as head coach at Wisconsin and Arkansas. While at Wisconsin, he led the Badgers to three Big Ten championships and six consecutive bowl games including two Rose Bowls.

Coach Sean Lewis recently completed his fourth season as HC at Kent State and recently took the offensive coordinator job at Colorado. Lewis brings an extensive coaching résumé to Colorado after his time at Kent State and has been one of the fastest-rising coaches in the nation over the last decade.

Ryan Riemedio completed his first season as the Head Coach at Mercyhurst and his 10th year on the Mercyhurst University football staff in 2022. In 2021, he was elevated to Assistant Head Coach and defensive coordinator while coaching the team’s linebackers and continued his role as the program’s strength and conditioning coordinator. Riemedio joined the Mercyhurst football coaching staff in 2012 as a graduate assistant working with tight ends, fullbacks and assisting with the offensive line.

Dr. Alvin Parker completed his fifth season at Virginia Union University in 2022, and his 24th overall on the collegiate level. Dr. Alvin Parker got his start in coaching at Virginia Union in 1999 after he finished his playing time there. He served as the offensive coordinator and running backs coach at VUU until 2003. In 2004, Coach Parker was hired as the assistant head coach and offensive coordinator at Elizabeth City State University for where he spent 12 seasons.

Julian Griffin currently serves as the running backs coach at the University of Texas at San Antonio. In 2021 coached Griffin coached C-USA Player of the Year, Sincere McCormick on the way to the school’s first-ever conference championship title. Griffin was also selected to the 2022 AFCA 35 Under 35 Leadership Institute. Prior to UTSA, Griffin served as the offensive quality control assistant for two seasons at the University of Arkansas.

15:27 The process of getting your first full time job

50:00 Being an elite recruiter

1:07:00 How to communicate expectations

1:19:56 What does discipline mean in your football program?

1:31:00 Maintaining discipline in communication as a coordinator