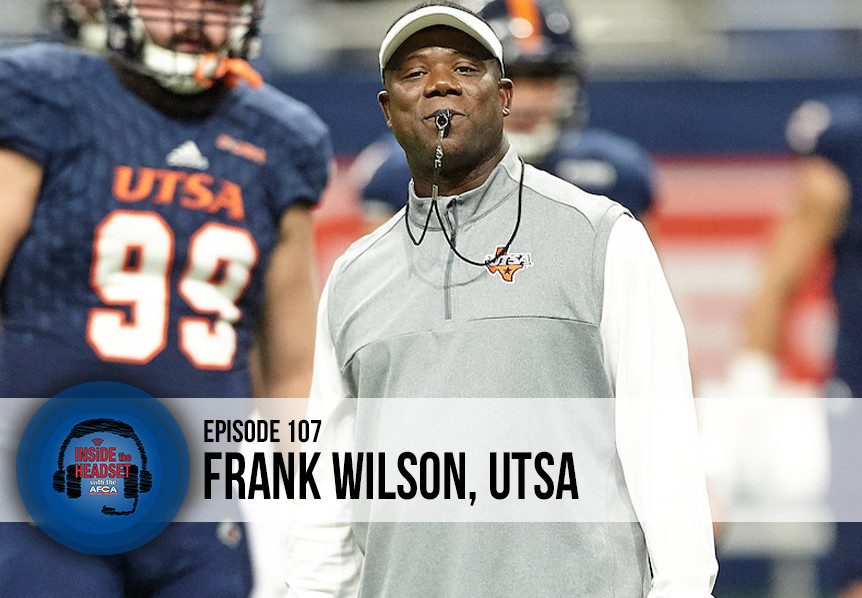 This week on Inside the Headset we speak with Frank Wilson, Head Coach for the University of Texas at San Antonio. We discuss his time as a high school teacher and coach in Louisiana, and how he’s working to build tradition in a young football program.

Coach Wilson’s career began as a student assistant at Nicholls State University in 1996 after he finished his playing career there. He then returned home to New Orleans and became an assistant coach at Karr HS (LA) for three seasons (1997-1999), and it wasn’t long before he was named head coach at O.P. Walker HS (LA), where he led the football program from 2000-2003. In 2004, Coach Wilson stepped away from coaching to serve as the Director of Athletics for the New Orleans Public School System. After a season away, he jumped to the collegiate level and joined the staff at Ole Miss as the running backs coach (2005-2007). He later served as the running backs coach and recruiting coordinator at Southern Mississippi (2008), and he coached wide receivers at Tennessee (2009). Wilson joined the LSU staff in 2010 as the running backs coach and recruiting coordinator, and he eventually gained the title of Associate Head Coach (2010-2015). In 2016, Wilson was hired by UTSA and became the second head coach in the program’s history.