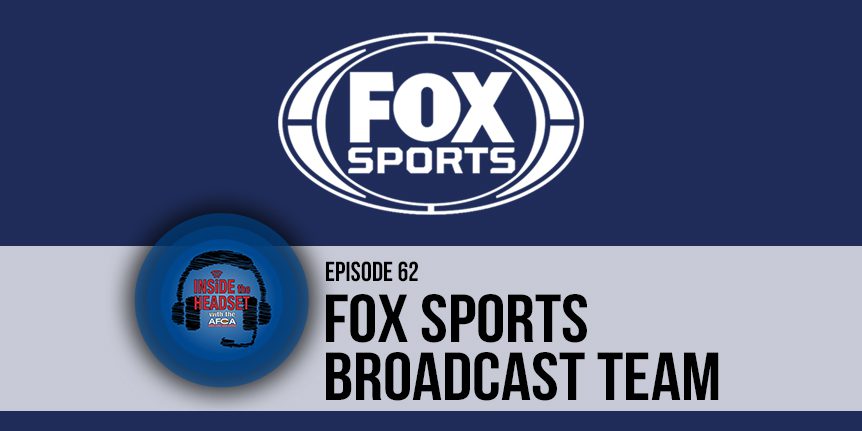 On this week’s episode of Inside the Headset we speak with current Fox Sports college football analysts Brady Quinn, Robert Smith, and Dave Wannstedt. We caught up with them over the summer at the Big 12 Media Days and discussed their careers in football, the role that coaches played in their lives, and some foundation that they’re involved with.

Brady Quinn starred as quarterback for the Notre Dame Fighting Irish (2003-2006) before being drafted by the Cleveland Browns in the first round of the 2007 NFL Draft. He spent time with eight different franchises during his time in the NFL. Quinn has served as a football game analyst for Fox Sports since 2014. He and his wife Alicia founded the charity 3rd & Goal in 2011 and continue to serve as co-chairs of the foundation.

Robert Smith played collegiate football and ran track for Ohio State University before being drafted by the Minnesota Vikings in the first round of the 1993 NFL Draft. He was a two-time Pro Bowler during his eight-year career with the Vikings; he retired in 2000. Smith spent time as a college football analyst for ESPN prior to joining Fox Sports as a football analyst in 2016.

Dave Wannstedt began his coaching career as a graduate assistant at the University of Pittsburgh, his alma mater, and was a part of their 1977 national championship team (1975-1978). He went on to coach the defensive line at Oklahoma State University (1979-1982) and USC (1983-1985) before serving as the defensive coordinator for the University of Miami and winning another national championship in 1987 (1986-1988). Coach Wannstedt followed Jimmy Johnson to the Dallas Cowboys as his defensive coordinator (1989-1992), and after winning the Super Bowl in 1992, he was hired as head coach of the Chicago Bears (1993-1998). He served as the assistant head coach for the Miami Dolphins for two seasons (1999-2000) prior to being promoted to head coach (2000-2004). In 2005, Wannstedt returned to Pitt as the head coach and coached a number of future NFL talents (2005-2010) before joining the Buffalo Bills (2011-2012). He last served as the special teams coordinator for the Tampa Bay Buccaneers in 2013. Coach Wannstedt has been a football studio analyst with Fox Sports since 2014.