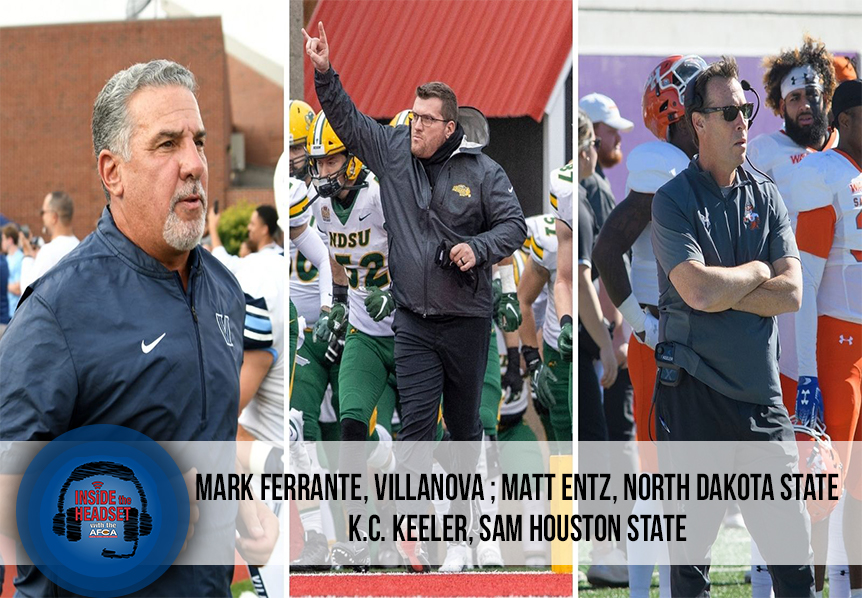 This week on Inside the Headset, we are featuring the 2021 AFCA FCS Regional Coaches of the year. These coaches include North Dakota State Coach Matt Entz, Villanova Coach Mark Ferrante, and Sam Houston State Coach K.C. Keeler.

K.C. Keeler recently completed his eighth season as head coach of the Sam Houston State University Bearcats. In his tenure, he has directed the Bearkats to a 90-23 record with 14 wins in NCAA postseason action including the 2021 FCS National Championship (Spring). Prior to taking over at SHSU, Keeler spent time as the head coach at his alma mater Delaware from 2002-2012. His Fightin’ Blue Hens won the FCS national championship in 2003 and reached the national championship game in 2007 and 2010. Before Delaware, Keeler produced an 88-21-1 record at Rowan University (1993-2001).

Matt Entz recently completed his third season as head coach of the North Dakota State Bison. in his short time as head coach, Entz has continued the Bisons winning ways by winning the FCS National Championship in 2019 and 2021 while compiling an overall record of 20-3. Before taking over as head coach, Entz served as the defensive coordinator and linebackers coach for North Dakota State from 2014-2018. Coach Erntz has also been the recipient of the AFCA FCS Coach of the Year award in 2019 and 2021.