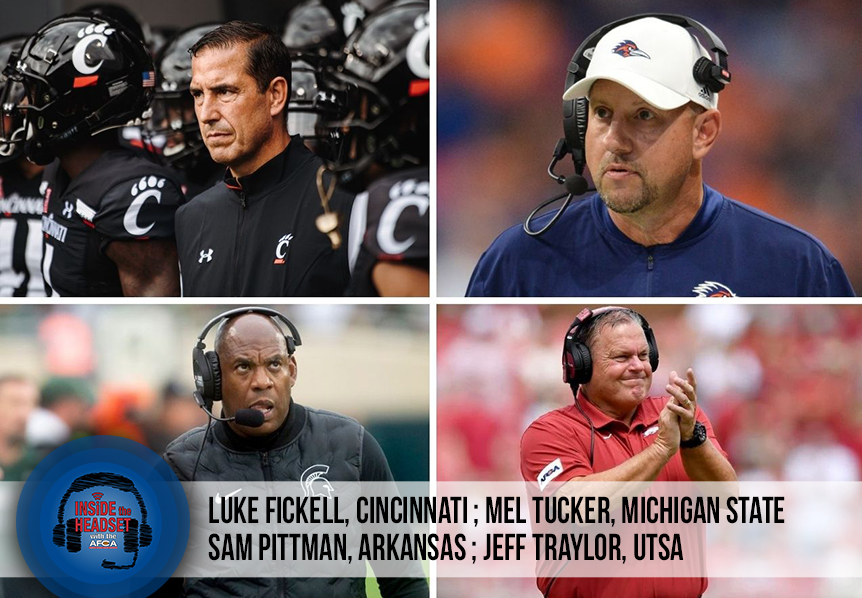 This week on Inside the Headset, we are featuring the 2021 Werner Ladder AFCA FBS Regional Coaches of the year. These coaches include Cincinnati Coach Luke Fickell, Arkansas Coach Sam Pittman, Michigan State Coach Mel Tucker, and UTSA Coach Jeff Traylor.

Luke Fickell recently completed his 5th season as the Head Coach of the Cincinnati Bearcats. Fickell has found much success with the Bearcats where he has led Cincinnati to back-to-back 11-win campaigns in 2018 and 2019 and an undefeated regular season that culminated with a Peach Bowl berth in 2020. Fickell led the Bearcats to the greatest season in school history in 2021, which included an appearance in the College Football Playoff Semifinals at the Cotton Bowl and the first-ever 13-0 regular season. Prior to Cincinnati, Fickell coached at the Ohio State University from 2002-2016 where he served in many different roles including defensive coordinator and head coach.

Sam Pittman recently completed his second season as the Arkansas Head Coach. Pittman has brought the razorbacks immediate success in the SEC while leading the program to its most wins in 6 years. The Oklahoma native has coached at seven different Power 5 schools during his 32 years of coaching, including Oklahoma, Missouri, Kansas, Georgia, North Carolina and Tennessee. With a wealth of experience, Pittman is widely regarded as one of the nation’s best coaches when it comes to developing offensive talent as he has coached seven offensive linemen that were selected in the first round of the NFL Draft.

Jeff Traylor recently completed his second season as the Head Coach at UTSA. This past season, Traylor led the roadrunners to a program record 11 regular season wins, won the school’s first C-USA Championship Title, and earned a berth to the Tropical Smoothie Café Frisco Bowl. Traylor has been honored for his success as the 2021 C-USA Coach of the Year and the AFCA FBS Regional Coach of the Year for Region 4. Traylor has more than 30 years of coaching experience including a highly successful 15-year career as head coach at Gilmer High School, where he led teams to three state championships and two state runner-up finishes.