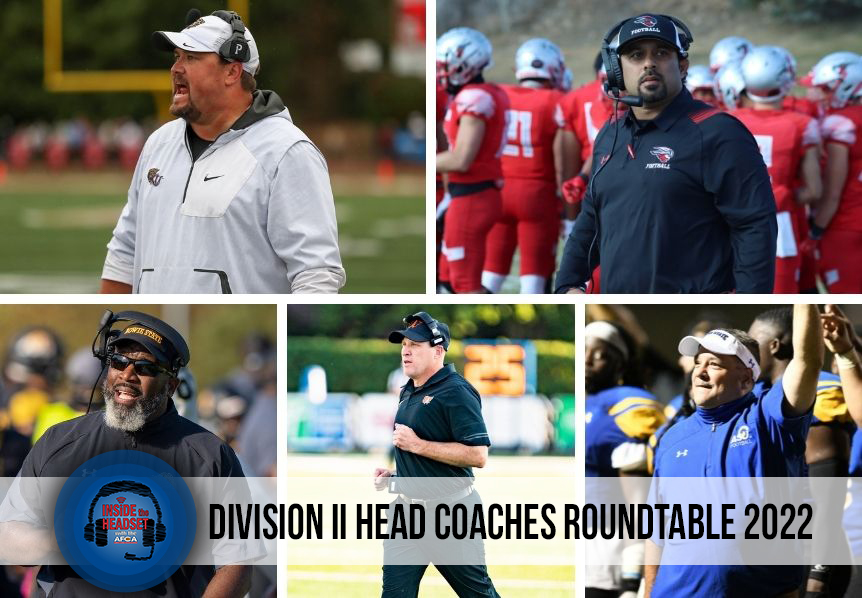 Jim Clements recently completed his seventh season as Kutztown University’s head coach. Clements has achieved winning seasons in each of his seven seasons at the helm of the Golden Bears, making him the first KU head coach in program history to open his career with consecutive winning seasons. At Kutztown, he brought KU back to the NCAA Tournament in both 2018 and 2019 for the third and fourth times in school history. In 2019, the Maroon and Gold won their first 10 games to finish the regular season 10-0, before earning a spot in the PSAC Championship game. Clements came to Kutztown after serving as the head coach at Division III Delaware Valley College for eight years where he was a three-time MAC Coach of the Year (2009-11).

Rob Keys recently completed his 11th season at the helm of the Oilers football program in 2021. He has recorded a 75-43 record with the program as a head coach, which includes a 34-26 mark in GLIAC games and a 27-8 mark in G-MAC games. The 2021 fall season saw Findlay win their first G-MAC Conference Title in program history. In 2017 Coach Keys led Findlay to their first-ever NCAA playoff appearance and led them to their second appearance in 2021. Prior to becoming head coach, Keys previously served as the co-defensive coordinator and special teams coordinator for the Oilers from 2000-04.

Jeff Girsch, who has spent more than 20 years as a college football coach, will enter his fourth season as head coach of the Rams, and ninth overall at Angelo State. Taking over the program in 2018, Girsch transformed a .500 win team into a national championship contender in just three seasons. The Rams finished the 2021 campaign with an 11-3 overall record, advancing to the quarterfinals of the NCAA Division II National Championship for only the second time in program history. Before becoming head coach, Girsch was the defensive coordinator for the rams from 2015 until being promoted to head coach. Prior to joining Angelo State University, Girsch had spent 18 years coaching at St. Ambrose University, with his last six as the Defensive Coordinator and Assistant Head Coach.  He was named the MSFA Assistant Football Coach of the Year in 2008.

Jas Bains enters his 13th season at the helm of the Western Colorado football team in 2022, the longest consecutive tenure in the program’s history. This past year Coach Bains led the Mountaineers to one of its best seasons in program history going 10-2 and earning a share of the RMAC Conference Title. The co-championship title was the first since the 1998 season, and their NCAA playoff invite was also a first for Western since they last played in the Division II national tournament in 1997. Prior to Western, Bains spent five seasons as a member of the coaching staff at Chadron State, with the final three as special teams coordinator and defensive secondary coach.