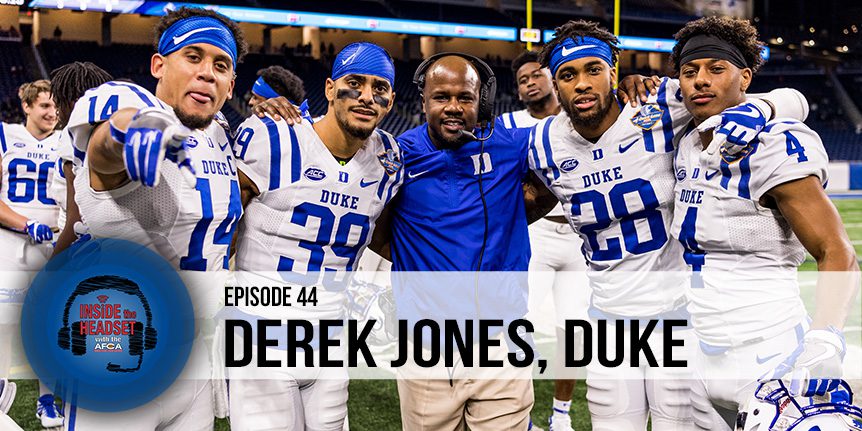 On this week’s episode of Inside the Headset, we speak with Duke University’s Associate Head Coach and Cornerbacks Coach Derek Jones about the identity he created for his position group, how he utilizes social media, and lessons learned from Head Coach David Cutcliffe.

Coach Jones’ career began at the University of Mississippi, his alma mater, as an Operations and Recruiting Graduate Assistant in 1998 prior to serving as a Defensive Graduate Assistant for the 1999 season. He then became a full-time coach at Murray State working with the cornerbacks, and he was also the recruiting coordinator (2000-2004). Jones coached defensive backs at Middle Tennessee State (2005), Tulsa (2006), and Memphis (2007). In 2008, Derek Jones joined Coach Cutcliffe’s staff at Duke, where he has been an integral part of the Blue Devils’ success. Additionally, Jones is a published author.

I love coaching DBs because no one can complain about not getting the ball. If you want to eat, you have to go hunt. Accept the role! #Ap2w pic.twitter.com/fG2S6CE0WT