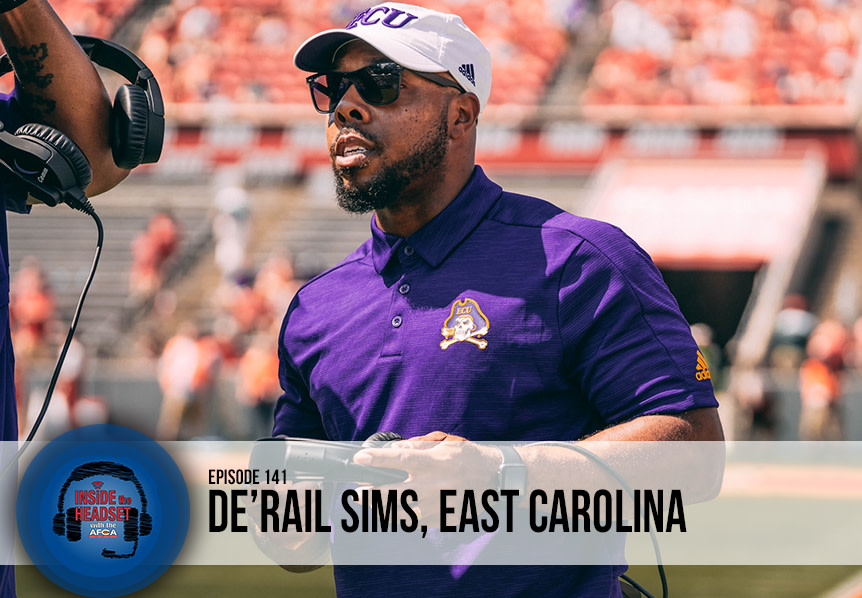 This week on Inside the Headset, we are featuring East Carolina University Running Backs Coach, De’Rail Sims. Coach Sims discusses some of the methods he uses to improve as a coach, the importance of pursuing professional development opportunities, and the significance of coaching at different levels.

De’Rail Sims was named East Carolina’s running backs coach in December of 2018. During his first year at East Carolina, Sims guided his corps to their highest single-season rushing yardage total (1,696) since 2014. Prior to ECU, Coach Sims was James Madison’s running backs coach from 2016-18. He helped the Dukes collectively stand 4th nationally in rushing TDs (108), 6th in rushing yards (9,422), and 13th in rushing yards per game (219.1). Sims has also had coaching stints at West Carolina (2013-15), Carson-Newman (2012), Pikeville (2011), and Milerville (2010). Coach Sims has been a part of various professional development opportunities, such as the AFCA’s 35 Under 35 Coaches Leadership Institute in 2019 and the NCAA & NFL Coaches Academy in 2014.