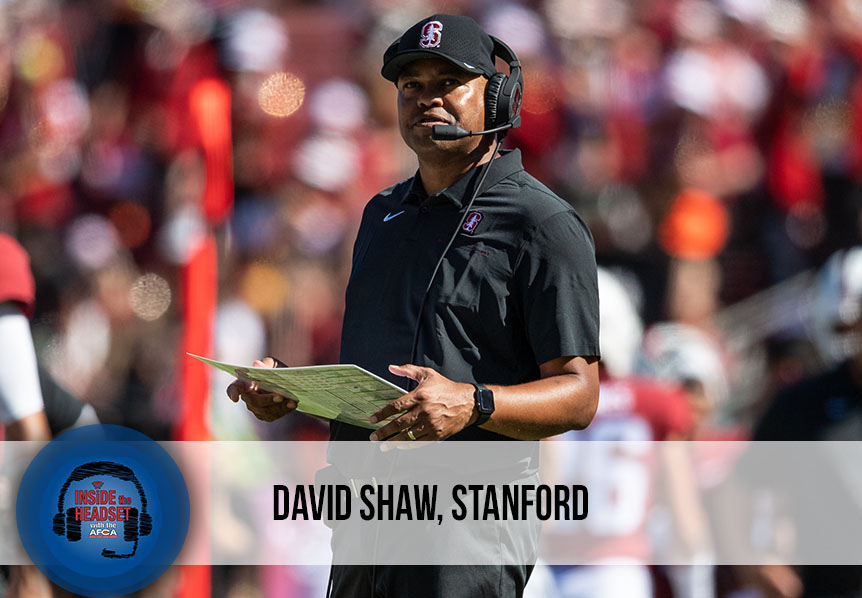 This week on Inside the Headset, we are featuring Stanford’s Head Coach, David Shaw. Coach Shaw speaks about his dad’s legacy, shares his impressive list of mentors, and discusses the importance of community.

David Shaw is preparing for his 12th season as the Bradford M. Freeman Director of Football at Stanford University. Coach Shaw is Stanford’s winningest coach in program history. In 11 seasons Coach Shaw and his teams have accomplished the following: 93 wins, 8 bowl games with 5 wins, 4 Pac-12 Championship appearances, with 3 wins, and 3 Rose Bowl appearances. Additionally, Coach Shaw is the longest-tenured Black head football coach at any one FBS school as well as the winningest Black head coach in Power Five history.

Coach Shaw has nine years of NFL coaching experience from time spent with the Philadelphia Eagles, Oakland Raiders, and Baltimore Ravens. Coach Shaw also coached at the University of San Diego in 2006 when they won the Pioneer League Championship and the Division 1-AA Mid-Major national title. Coach Shaw started coaching in 1995 after graduating from Stanford and finishing his four years of collegiate eligibility. While at Stanford Coach Shaw was coached by many, including his father Willie.

In addition, Coach Shaw is also the Chair of the NCAA Football Rules Committee and serves on the AFCA Board of Trustees.

[8:08] Experience On the Other Side of the Ball (Defense)