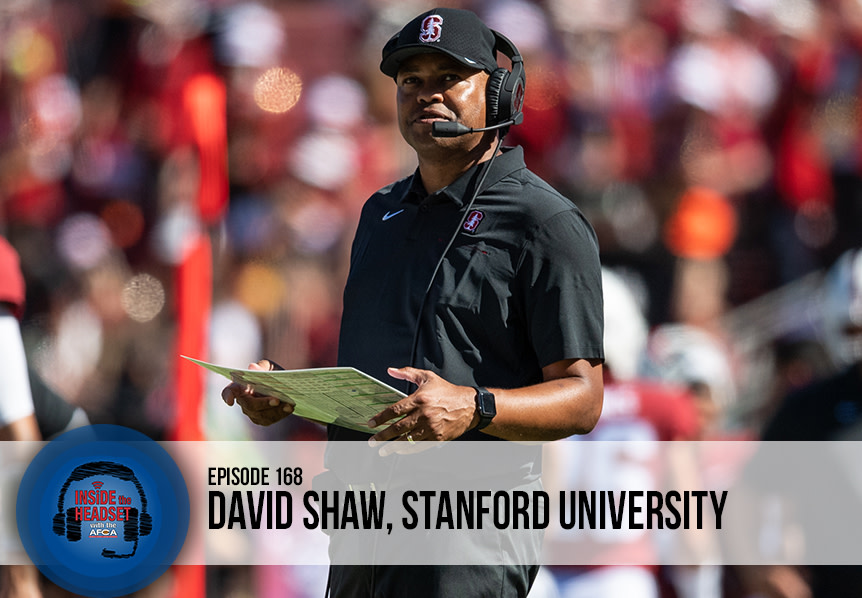 This week on Inside the Headset we are featuring Stanford University Head Coach David Shaw’s general session from the 2016 AFCA Convention. Coach Shaw highlights the significance of developing meaningful relationships, discusses the importance of remaining patient with young players, and shares the value of building a consistent culture.

David Shaw is currently in his 10th season as Stanford’s Bradford M. Freeman Director of Football. A 1995 Stanford graduate, Shaw is the 34th head coach in Stanford history and the winningest coach in program history.

Throughout his time at Stanford, he has led the Cardinal to three Pac-12 titles and a pair of Rose Bowl wins in three trips to The Granddaddy of Them All. Under Shaw’s leadership, Stanford has won at least 11 games in four different seasons and has appeared in a bowl game in eight of nine seasons.

Shaw’s coaching resume also includes nine years of NFL experience with the Philadelphia Eagles (1997), Oakland Raiders (1998-2001), and Baltimore Ravens (2002-05). Shaw began his NFL coaching career as the quality control coach with the Philadelphia Eagles in 1997. After three seasons of quality control with the Oakland Raiders from 1998-2000, Shaw moved into the role of quarterbacks coach in 2001, as the Raiders won a second straight AFC West title. Shaw’s last coaching job in the NFL with Baltimore included a stint as the quarterbacks and wide receivers coach. His tenure included an AFC North title in 2003.

He launched his coaching career at Western Washington, where he coached outside linebackers in 1995 and the tight ends in 1996.