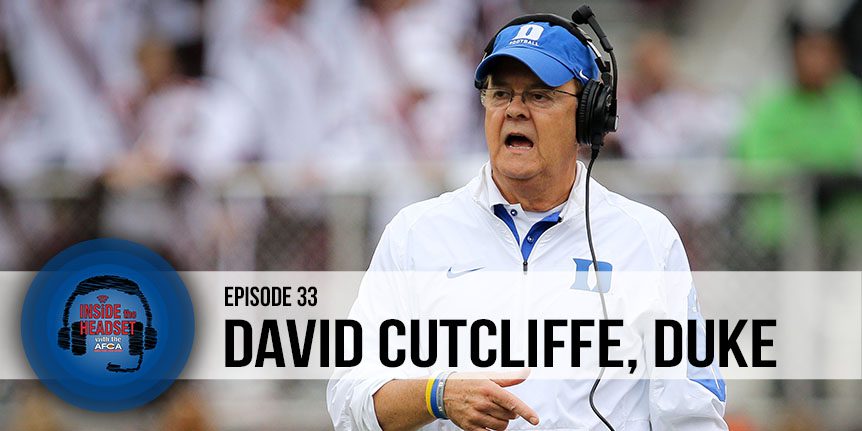 On this episode of Inside the Headset, we are joined by one of the best in the coaching profession, David Cutcliffe, head coach for Duke University. We discuss how he’s built a competitor at Duke, qualities he looks for in assistant coaches, the importance of practice, and how a health scare in 2005 altered his perspective.

Coach Cutcliffe’s career began at the high school level in 1976. He was assistant at Banks (Ala.) HS for four seasons before serving as the head coach from 1980-1981. Cutcliffe then climbed to the college ranks and joined the staff at the University of Tennessee as a tight ends coach in 1982; he remained with the program until 1998. During his time with the Vols, he would spend time coaching running backs and quarterbacks (including Peyton Manning), and was eventually named offensive coordinator and assistant head coach. Cutcliffe began his collegiate head coaching career at Ole Miss (1998-2004), where he would coach Eli Manning.

In 2005, he joined Charlie Weiss’s staff at Notre Dame, but he was forced to resign before the season because he needed open-heart surgery. After recovering, he went back to Tennessee (2006-2007) as the assistant head coach, offensive coordinator, and quarterbacks coach. Coach Cutcliffe took over the Duke program in 2008 and led the team to its first 10-win season in school history (2013). Plus, the Blue Devils have played a bowl game in five of the last six seasons.

Earlier this week on the ITH Twitter page, we announced a giveaway. Between segments we announce the three winners!

🚨🚨GIVEAWAY ALERT 🚨🚨
Follow and retweet for an opportunity to win an @WeAreAFCA Yeti!

In our second segment, we are joined by the AFCA Executive Director Todd Berry to discuss upcoming NCAA rule changes and proposals regarding kickoffs, redshirting, transfers, and giving scholarships to walk-ons.