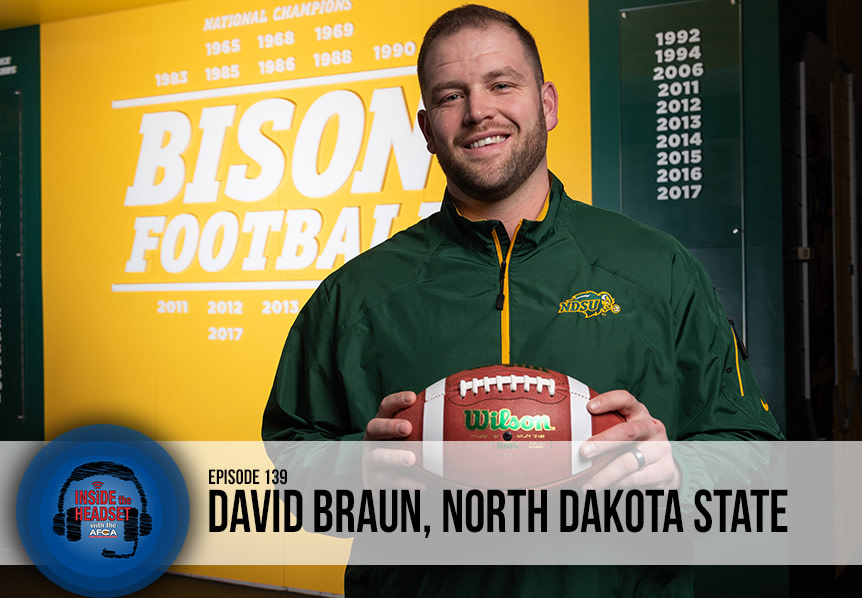 This week on Inside the Headset, we are featuring North Dakota State University Defensive Coordinator and Safeties Coach, David Braun. Coach Braun discusses his journey from graduate assistant to defensive coordinator, the importance of learning and coaching various positions, and the value of maintaining personal and professional relationships.

David Braun was named defensive coordinator and safeties coach at North Dakota State University in January 2019. In his first season at NDSU, Braun led a defense that ranked first in the Football Championship Subdivision in scoring defense (12.3 ppg) and passing yards allowed (138.6 ypg) while finishing second in total defense (274.7 ypg) and pass efficiency defense (104.8). Braun came to NDSU after two seasons at Northern Iowa, where he was the defensive line coach and run game coordinator (2017), and the outside linebackers coach and special teams coordinator (2018). He is a graduate of Winona State, where he played defensive line for NDSU head coach Matt Entz from 2004-07 and joined him on staff as a graduate assistant for two years after his playing career (2008-09). Braun was the defensive coordinator and linebackers coach at Culver-Stockton (2010), then returned to Winona State for four years as the co-defensive coordinator and linebackers coach (2011-14), and jumped to the FCS level as the defensive line coach at UC Davis for two seasons (2015-16).