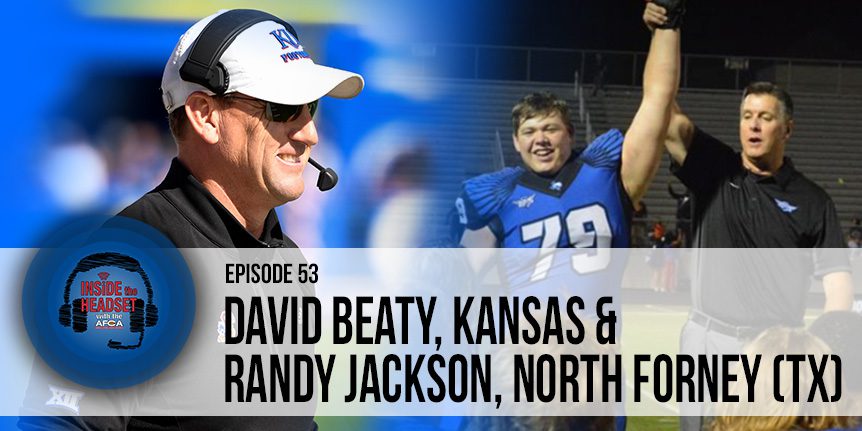 On this week’s episode of Inside the Headset we speak with David Beaty, head coach at the University of Kansas, and Randy Jackson, head coach at North Forney (Texas) HS. Coach Beaty discusses his time as a Texas high school coach, lessons he’s taken to his program at Kansas, and things he looks for in assistant coaches. Later, Coach Jackson discusses his coaching philosophy, building a strong program culture, and his offensive scheme.

David Beaty began his career coaching Texas high school football. He was an assistant coach at Naaman Forest HS in 1994, and after three seasons he joined the staff at Garland HS (1997-2000). He was also the head coach of North Dallas HS (2001) and Irving MacArthur HS (2002-2005). He made the jump to the collegiate level when he joined the staff at Rice as the passing game coordinator and receivers coach (2006-2007), then spent two seasons coaching receivers at Kansas (2008-2009). Beaty returned to Rice in 2010 to serve as the offensive coordinator, before returning to Kansas to serve as the co-offensive coordinator and receivers coach in 2011. He returned to the state of Texas in 2012 to coach receivers and serve as the recruiting coordinator at Texas A&M until 2014. Coach Beaty has led the Jayhawks since the 2015 season.

Randy Jackson’s coaching career began at Quinlan (Texas) HS twenty-eight years ago and has taken him all over the state of Texas. He has built a reputation for taking over programs that lack a winning tradition and building them in to competitors. From 2000 until 2009 he served as the head coach at DeKalb HS, Mason HS, Paducah HS, and Lone Oak HS. More recently, Coach Jackson has led the program at Mesquite Poteet HS (2010-2012), Plano East HS (2013), and Grapevine HS (2014-2016). He was hired as the head coach at North Forney HS in 2017 and is in his second season with the program. Jackson is a published author (Culture Defeats Strategy), and you can learn more about him on his website.