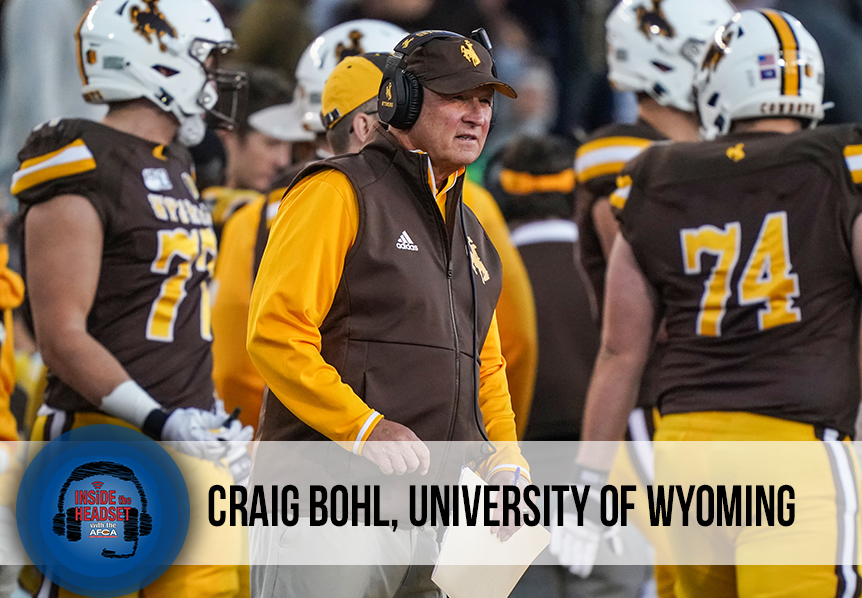 This week on Inside the Headset, we are featuring University of Wyoming head coach, Craig Bohl. Coach Bohl explains the importance of having a clear vision for your program, discusses why you should trust your instincts as a coach, and highlights the benefits of finding players that fit your specific program.

Craig Bohl recently completed his 8th season as the head coach of the University of Wyoming and his 19th season as a head coach at the collegiate level. Coach Bohl has has brought a level of success to the cowboys that has not been seen in quite some time. The 2018 season saw the Cowboys earn bowl eligibility for the third consecutive season, marking the first time a UW team had achieved that since the 1997-99 seasons. In total, Bohl has lead the cowboys to four bowl games going 3-1 in those contests. In 2016 Bohl was named the Mountain West Conference Coach of the Year after leading his team to the Mountain Division title of the Mountain West Conference.

Coach Bohl came to Wyoming after building a national power at North Dakota State as a head coach for 11 seasons from 2003-13.  His teams won three consecutive National Championships at the FCS level in 2011, ‘12 and ‘13. His success with the Bison earned his numerous Coach of the Year awards including the AFCA Coach of the Year in 2012 and 2013. Prior to North Dakota State, Bohl spent eight seasons at Nebraska as an assistant coach under Tom Osborne where he was part of the 1995 and 1997 Nebraska National Championship teams.