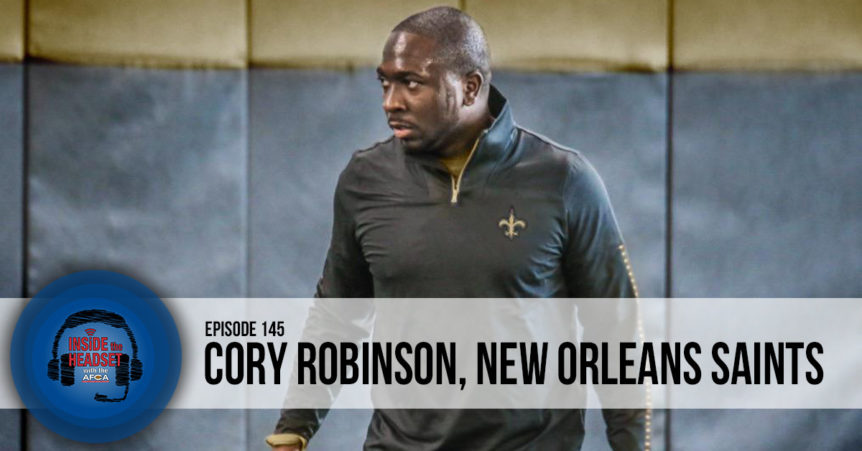 This week on Inside the Headset, we are featuring New Orleans Saints Defensive Assistant, Cory Robinson. Coach Robinson discusses the importance of support staff, shares his mission to mentor young men through Next Level Nation, and offers advice for coaches looking to advance their career.

Cory Robinson is a ten-year coaching veteran, who recently joined the New Orleans Saints for his first full NFL campaign as a defensive assistant. Prior to New Orleans, Robinson spent four seasons in the college ranks working with defensive backs. The Baltimore native served as defensive passing game coordinator/defensive backs coach at the University of Maryland in 2019, where he also served as director of player personnel in 2015. Robinson also took part in a training camp internship with the Saints in 2019.

Prior to his 2019 stint in College Park, Robinson served as passing game coordinator/cornerbacks coach at Rutgers in 2018. He also coached cornerbacks at Toledo (2016) and Temple (2017). In 2017, he helped guide the Owls to a first-place American Athletic Conference ranking in pass defense as they allowed only 206.8 passing yards per game.

Robinson was a starting cornerback at Central Connecticut State, earning a bachelor’s degree in communications with a minor in business/marketing in 2009. He was also co-founder of Next Level Nation, a Baltimore-based nonprofit that hosted football workouts, among other services for local boys in need of mentorship.