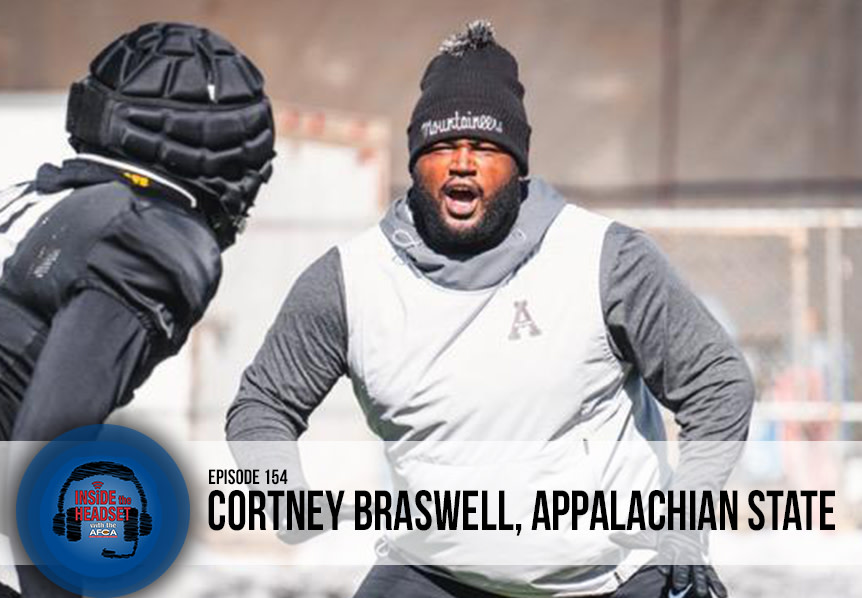 This week on Inside the Headset, we are featuring Appalachian State University Outside Linebackers Coach, Cortney Braswell. Coach Braswell shares his personal coaching journey, explains the significance of demonstrating grit, and highlights the importance of creating a family-focused culture.

Cortney Braswell was hired as an assistant coach on the defensive side of the ball by head coach Shawn Clark in January 2020. Braswell, a former high school head coach in Georgia and Tennessee, joined the Mountaineer staff after serving as a defensive quality control coach at Louisville for the 2019 season. During his one season at Louisville, Braswell worked for former Appalachian State head coach Scott Satterfield and helped the Cardinals to one of the biggest turnarounds in college football.

In 2018, as the head coach at Ridgeland High School in his hometown of Rossville, Georgia, Braswell led the Panthers to an 8-4 overall record, a Region 6-AAAA runner-up finish, and a 34-14 state playoff victory before a second-round loss at Cartersville, the eventual state runner-up.

Prior to taking over at Ridgeland, Braswell was the head coach at Chattanooga Central High School (TN) in 2016 and 2017, and led the Purple Pounders to the TSSAA state playoffs twice. He also served on the Tennessee Football Coaches Association Board of Directors to represent the interests of football coaches statewide and serve as a contributing voice with the TSSAA legislation.

A two-time all-state running back, Braswell graduated from his high school as its single-game, and career, rushing and scoring leader and later played college football at Liberty University.