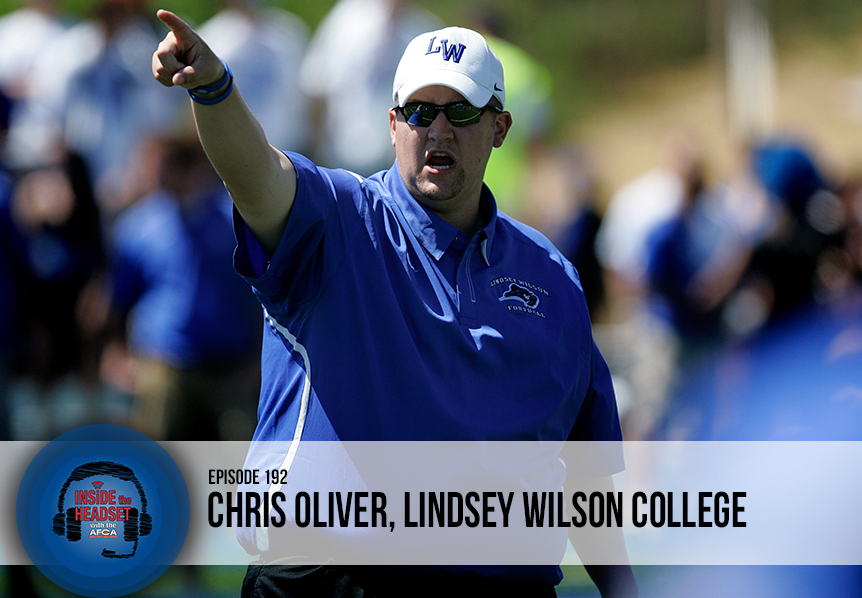 This week on Inside the Headset, we are featuring Lindsey Wilson College Head Coach, Chris Oliver. Coach Oliver reflects on his team’s journey to winning the NAIA National Championship, details how he’s built a football program from the ground up, and speaks on the importance of having strong senior leaders in the locker room.

Chris Oliver is entering his 12th season as head football coach of the Blue Raider football program. This past spring Coach Oliver lead his team to an undefeated 11-0 record and took home the first NAIA National Championship in program history. Coach Oliver has been the head coach at Lindsey Wilson since the inception of the football program in 2010. Over the past seven seasons the Blue Raiders have made the playoffs six times and have won multiple Mid-South Conference division titles under Coach Olivers direction.

Prior to Lindsey Wilson, Oliver spent five seasons as an assistant coach at Ohio Dominican. Similar to his role with the Lindsey Wilson program, Oliver helped start the Ohio Dominican football program. During his time at Ohio Dominican, Oliver led one of the most prolific offenses in the NAIA. In his last three seasons, Coach Oliver has consistently lead his offense to near the top of most statistical categories including total offense and passing offense. Prior to Ohio Dominican, Oliver served as a student assistant at The Ohio State University. Oliver worked with the Buckeyes’ tight ends and special teams. He also assisted with scouting and worked closely with recruiting.