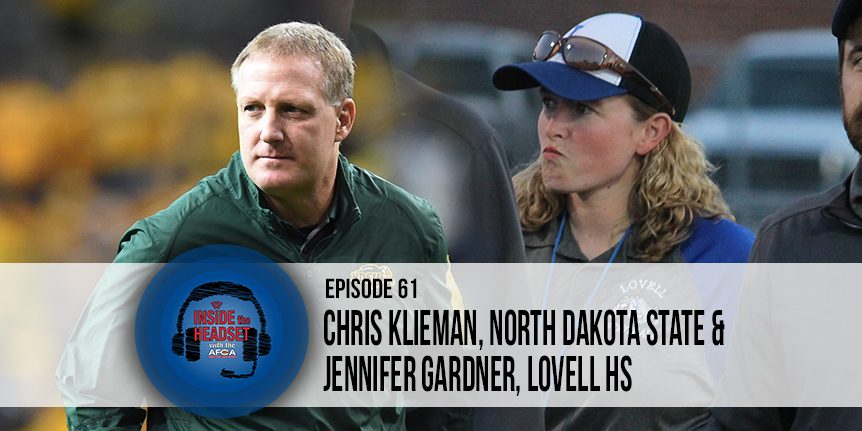 On this week’s episode of Inside the Headset we speak with Chris Klieman, head coach for North Dakota State University, and Jennifer Gardner, head coach for Lovell HS (WY). With Coach Klieman, we discuss his 2017 national championship team, how his players hold each other accountable, and how his dad influenced his coaching style. With Coach Gardner, we discuss how she became the first female high school head coach in Wyoming history and the importance of building relationships with players.

Coach Klieman’s career began as a defensive backs coach at Northern Iowa (1991-1993) after he graduated from UNI in 1990. He then went on to coach defensive backs at Western Illinois (1994-1996), Kansas (1997), and Missouri State (1999). In 2002, Klieman was named the defensive coordinator at Loras College, and he was promoted to head coach for the 2005 season. He returned to Northern Iowa (2006-2010) as a defensive backs coach before joining the staff at North Dakota State (2011). Klieman was named the defensive coordinator in 2012; he was named head coach of the Bison in 2014. Since he joined NDSU, Klieman has won six FCS national championships, including three as head coach.

Coach Gardner joined the coaching staff at Lovell HS (WY) in 2015 to work with the offensive and defensive lines. After three seasons, she was named head coach of the Bulldogs prior to the 2018 season. She’s the first female high school head coach in Wyoming’s history. For more on Coach Gardner, be sure to check out this article.