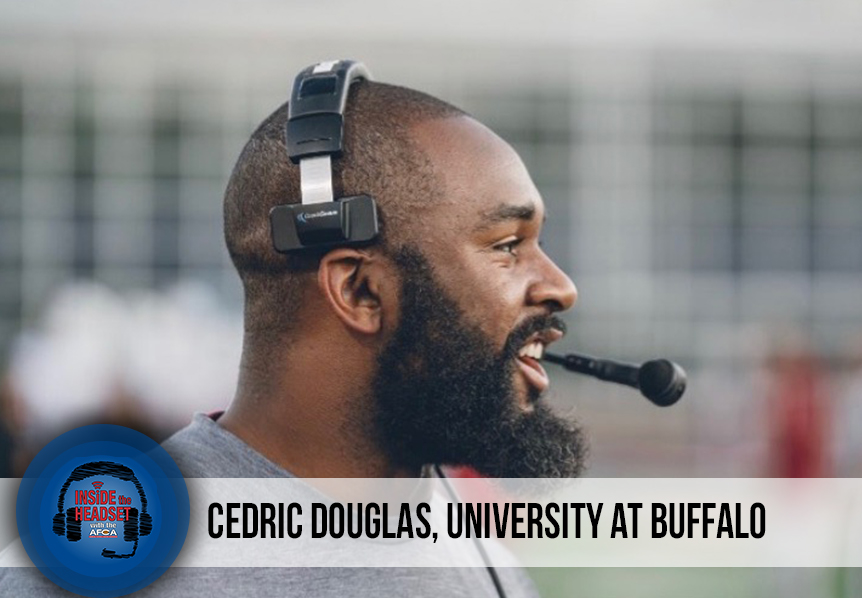 This week on Inside the Headset, we are featuring University at Buffalo Defensive Line Coach, Cedric Douglas. In this episode, Coach Douglas details how he identifies talent while recruiting football players, highlights the benefits of tailoring your coaching style to the type of player you are coaching, and shares what it means to play with a “samurai” mindset.

Cedric Douglas is in his second season as Buffalos defensive line coach. Coach Douglas led an aggressive defensive line in 2021. UB ranked second in the Mid-American Conference in sacks per game (3.1). In Buffalo’s win over Akron, the Bulls had a program-record 11 sacks, including a school-record 3.5 sacks by defensive end Kyler Laing. Prior to coming to Buffalo, Douglas spent two seasons as defensive line coach at Massachusetts. While at UMASS, Douglas’ defensive line led unit emerged as a strong point for the Minutemen.

Prior to UMASS, Douglas helped Arkansas State reach back-to-back bowl games in 2017 and 2018, during which he was a graduate assistant working with the defensive line. His efforts in guiding the defensive line led to a pair of major awards for Red Wolves standouts as Ja’Von Rolland-Jones won 2017 Sun Belt Player of the Year and Ronheen Bingham followed as the 2018 Sun Belt Defensive Player of the Year. Both also won All-Sun Belt First Team during their respective seasons. Douglas spent 2016 as defensive line coach and academic liaison at Hutchinson Community College in Kansas. During his lone season at Hutchinson, the Blue Dragons defense ranked No. 12 in the nation in scoring defense, No. 10 in total defense and No. 13 in rushing defense. Douglas has also had coaching stops at Coffeyville Community College in Kansas, Ave Maria University in Florida and Lincoln High School.