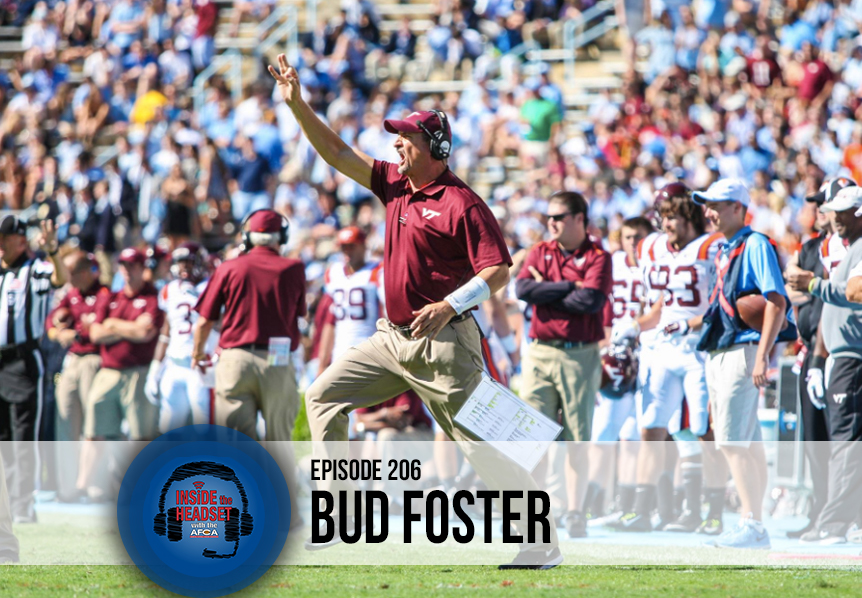 This week on Inside the Headset, we are featuring longtime Virginia Tech Defensive Coordinator, Bud Foster. Coach Foster shares the life lessons he learned through coaching, speaks on his personal relationship with Hall of Fame Coach Frank Beamer, and highlights how he adapted his defensive schemes to compete with everchanging offenses.

Bud Foster is the former longtime Virginia Tech Defensive Coordinator where he spent 33 seasons coaching. The architect of Tech’s famed Lunch Pail Defense, Foster was the longest continually tenured FBS assistant coach at the same school at the time of his retirement in 2019. Coach Foster held the distinction of serving as Tech’s defensive signal-caller starting in 1995 before taking over sole possession of defensive coordinator duties in 1996. Coach Foster was a key component in helping the Hokies register the nation’s longest active bowl streak recognized by the NCAA, a 26-year stretch that began in 1993.

Coach Foster was a recipient of the 2006 Broyles Award, given annually to the top assistant coach in the country, and was a finalist on three other occasions (1999, 2001, 2005). Coach Foster was named the Division I-A Defensive Coordinator of the Year by the AFCA after helping lead the Hokies to the 1999 national championship game. Under Coach Foster’s leadership, his defenses led the nation in a major defensive statistical category nine times and have placed in the top five 44 different times. Since Coach Foster was promoted to Defensive Coordinator (1996), 45 of his defensive players were drafted into the NFL including 11 players picked in the first/second round.