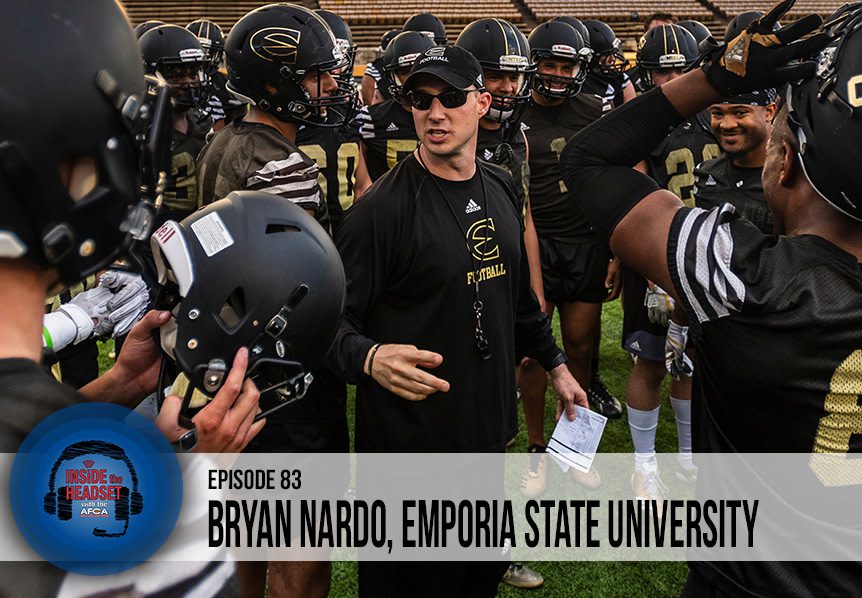 This week on Inside the Headset we speak with Bryan Nardo, Defensive Coordinator and Linebackers Coach for Emporia State University. We dive in to his coordinator philosophy, and he gives us the details on how he and the rest of the defensive staff approach each day of a typical game week.

Bryan Nardo’s coaching career began as a student assistant coach at Ohio University in 2005, and he worked with the linebackers and defensive backs (2005-2007). In 2008, he briefly served as the offensive graduate assistant for Southwest Minnesota State before becoming the defensive graduate assistant for Ohio University. Coach Nardo then joined the staff at Missouri University of Science & Technology as linebackers coach and special teams coordinator (2011). In 2012, Nardo was named the defensive coordinator and linebackers coach at Emporia State University. Coach Nardo was a participant in the AFCA’s 35 Under 35 Coaches Leadership Institute in 2019.

Culture is not a coach constantly screaming, disciplining, correcting or pushing…culture is when one player grabs another player to say “That’s not the way we do things here” when they notice them not following instructions or acting the wrong way…it’s player driven

Don’t get your head across, don’t cross your feet, accelerate through the ball carrier bringing your hips to finish #BeDifferent pic.twitter.com/sY9x8nMtGD