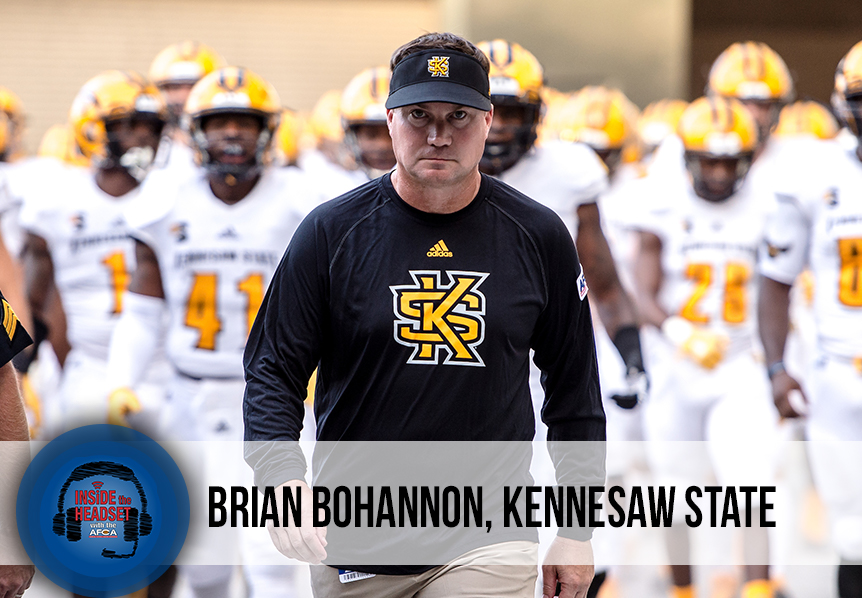 This week on Inside the Headset, we are featuring Kennesaw State University’s Head Coach, Brian Bohannon. In this episode, Coach Bohannon details his journey starting the Kennesaw State football program from the ground up, highlights the importance of being passionate about what you do, and shares how he combines old and new school coaching philosophies to be successful.

Brian Bohannon has constructed Kennesaw State from the ground up and turned the Owls into a powerhouse program at the FCS level in just seven seasons. Hired on March 24, 2013 and tasked with building a football program from scratch, Bohannon embraced the challenge and quickly turned Kennesaw State into the best five-year start-up program in college football history in 2019 with a 48-15 overall record, two Big South Conference championships, three straight appearances in the FCS Playoffs and four playoff victories. Bohannon is a four-time finalist for the Eddie Robinson award as the nation’s top FCS head coach, including a runner-up finish in 2018 and a third-place finish in 2017. He was named the AFCA National Coach of the Year in 2017 and is a three-time Big South Conference Coach of the Year.

Bohannon is tied for first in Big South Conference history with 63 victories and he become the fastest coach to win 45 games when he reached the benchmark with a 38-35 win over Campbell on Nov. 9, 2019. In the first five years of the program, 100 national polls have been released with the Owls appearing in over 67-percent of the rankings. Of those 100 polls, Kennesaw State has been inside the top-10 41-percent of the time. In a sideline career that’s spanned 23 years as either an assistant or head coach, Bohannon has been part of teams that averaged 8.6 wins per season and reached the postseason 18 times. Prior to Kennesaw State, he was a part of two national championships while at Georgia Southern, while Georgia Tech played in a bowl game in each of his five seasons on staff. A Griffin, Georgia, native and former wide receiver at the University of Georgia, Bohannon joined the Owls after spending the previous five seasons as quarterbacks/B-backs coach at Georgia Tech where he helped engineer one of the country’s most prolific spread option offenses.