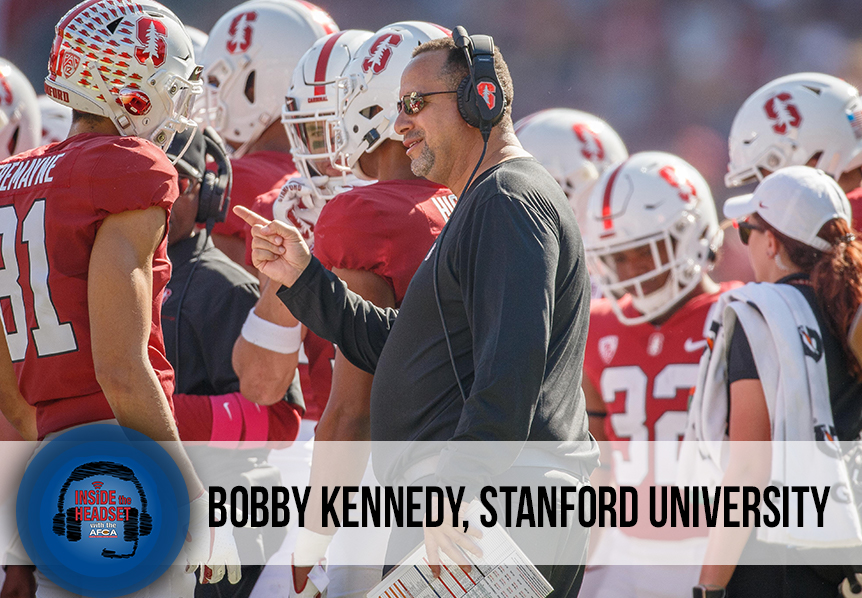 This week on Inside the Headset, we are featuring Stanford’s Wide Receivers Coach, Bobby Kennedy. Coach Kennedy shares the positive impact that coaching mentors have played in his life, highlights the importance of setting players up for success after their football career, and speaks on the benefits of being involved with the AFCA.

Bobby Kennedy is entering his fifth season as the Wide Receivers Coach for the Stanford Cardinal. Despite injuries plaguing the Cardinal wide receiving corps, Kennedy’s group was a bright spot of the Stanford offense week in and week out during the 2021 season. Throughout his time leading the Cardinal receiving unit, Kennedy has produced multiple All Pac-12 selections, NFL Draft picks, and record breakers that have rewritten the Stanford record books. Kennedy brought 26 years of collegiate coaching experience to Palo Alto. His most recent stops included four years as the wide receivers coach at Iowa (2013-16), and he held the same position at Colorado (2011-12). The Hawkeyes reached a bowl game in all four years of Kennedy’s tenure, including a perfect 12-0 regular season record in 2015, when Iowa won the West Division of the Big Ten Conference, participated in the 2016 Rose Bowl and ended the season in the top-10 of the national rankings.

Kennedy joined the Colorado staff after spending time at Texas, where he spent seven seasons (2004-10) as wide receivers coach, the last six as the assistant recruiting coordinator. In his time at Texas, Kennedy coached in two BCS National Championship games, the 2005 Rose Bowl victory over USC when the Longhorns won the national championship, and in 2009 against Alabama. Kennedy’s first season in Austin came immediately after the Longhorns had lost three wide receivers to the NFL. He proceeded to build a receiving corps that included three Biletnikoff Award candidates, including two semifinalists and one finalist. Kennedy joined the Texas program from Washington, where he tutored wide receiver Reggie Williams to two All-America campaigns before he became the ninth overall pick in the 2004 NFL Draft. Kennedy also coached running backs at Arizona in 2001, and had a six-year tenure at Wake Forest, coaching the Demon Deacon running backs in 1999-2000 after four years (1995-98) as receivers coach before getting his coaching start at the University of Wyoming.