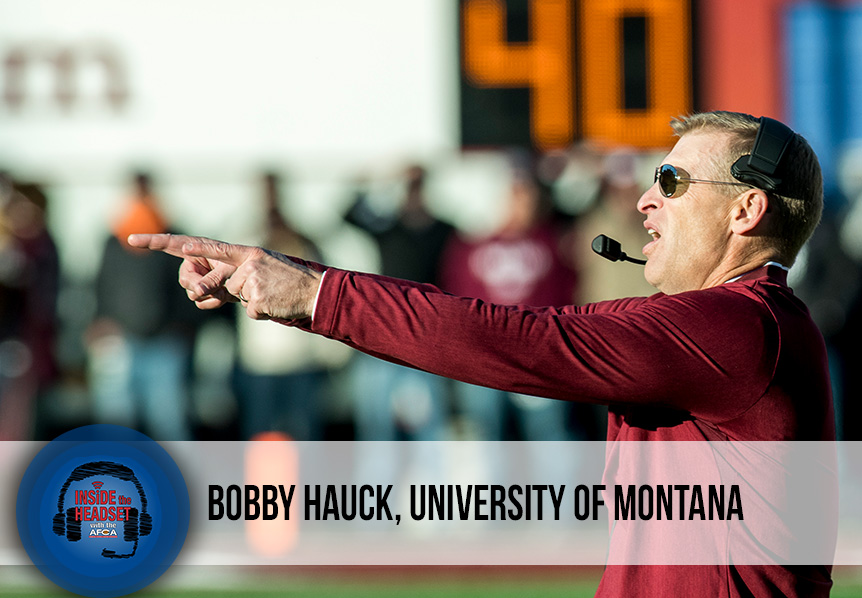 This week on Inside the Headset, we are featuring the University of Montana’s head coach, Bobby Hauck. Coach Hauck discusses his deep history with the university, explains Montana’s unique football culture, and shares why he decided to serve on the AFCA Board of Trustees.

Bobby Hauck is preparing for his fourth season in his second stint as the head coach at the University of Montana. Hauck first coached at Montana in 1988 after graduating in 1987 and is now the winningest coach in Montana’s history. In addition, Hauck’s Grizzlies are the most academically successful of any program in school history, including five 4.0 GPAs. In this second stint as Montana’s head coach, it is likely that Coach Hauck will seek to win more Big Sky Conference championships and again outscore his opponents by over 1,000 points in under 100 games.

Hauck got his start in coaching immediately after he graduated college, he served as a defensive line and defensive backs coach at Montana from 1988 to 1989. Hauck then took on many responsibilities as he joined the UCLA staff from 1990 to 1992, served as the OLB coach from 1993 to 1994 at Northern Arizona, and then took on more responsibility at Colorado from 1995 to 1998 and spent 1999 to 2002 coaching at Washington before heading back to Montana. In 2003 Hauck returned to Montana as head coach and remained there until 2009. From 2010 to 2014 Hauck served as the head coach at UNLV and then as the associate head coach and special teams coordinator at San Diego State from 2015 to 2017. Starting in 2017, Hauck has been serving as the head coach at Montana once again.