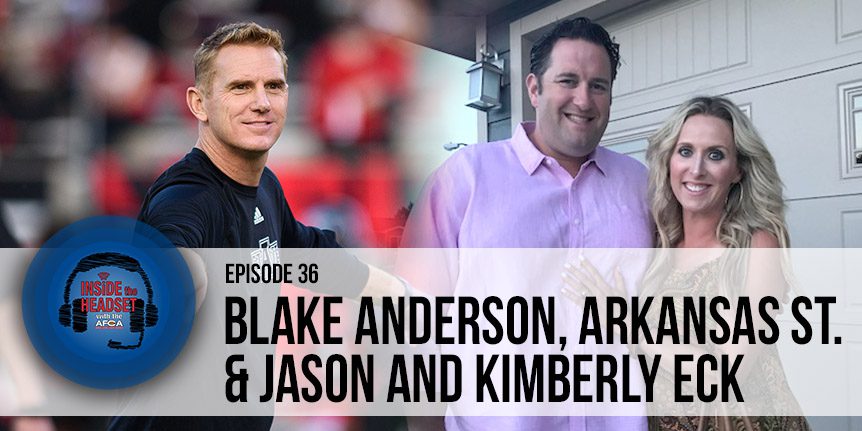 On this episode of Inside the Headset, we speak with Blake Anderson, head coach for Arkansas State, and Jason Eck, offensive line coach for South Dakota State, and his wife, Kimberly.

Coach Anderson began his career as a graduate assistant at Eastern New Mexico before joining the staff full-time working with the wide receivers (1992-1993). Early on, he also had stints at Howard Payne (1994), Trinity Valley Community College (1995-1998), New Mexico (1999-2001), and Middle Tennessee (2002-2004) working with the offensive skill positions and having some play-calling responsibilities. Anderson left the coaching profession for the 2005 and 2006 seasons, selling insurance while he focused on rebuilding his relationship with his family. He re-entered the profession with a renewed mentality and served as the offensive coordinator and quarterbacks coach at Louisiana-Lafayette (2007), Southern Mississippi (2008-2011), and North Carolina (2012-2013) prior to becoming the head coach at Arkansas State in 2014.

Coach Eck’s career began as a graduate assistant for Wisconsin and Colorado before becoming the offensive line coach at Idaho (2004-2006). He also spent time on the offensive staffs for Winona State (2007-2008), Ball State (2009-2010), Hampton (2011), and Western Illinois (2012) before becoming the offensive coordinator for Minnesota State (2013-2014). Eck then coached offensive line and served as the run-game coordinator for Montana State (2015) prior to joining South Dakota State in the same role in 2016. His wife, Kimberly, is on the Board of Directors of the AFCWA and writes a blog.