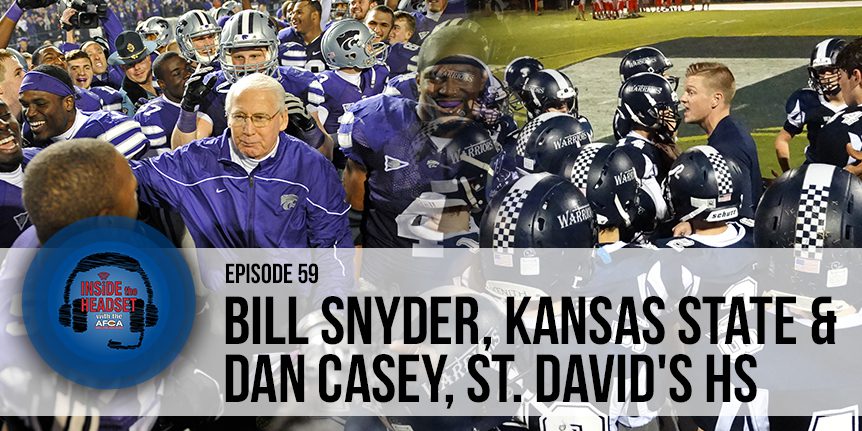 On this week’s episode of Inside the Headset we speak with Bill Snyder, head coach at Kansas State University, and Dan Casey, head coach at St. David’s School (NC). We spoke with Coach Snyder at the Big 12 Media Days about his legacy from over 50 years as a coach, the evolution of his offense, and how he built the program at K State. With Coach Casey, we discussed lessons he learned after his first season of coaching, adaptations in eight-man football, and his experience coaching football in China last offseason.

Coach Snyder’s career began as a high school assistant coach at Gallatin HS (MO) in 1962, but his next job took him to Indio HS in California (1964-1965). After serving as a graduate assistant at the University of Southern California in 1966, Snyder returned to Indio HS as their head coach for the 1967 and 1968 seasons. He went on to become the head coach at Santa Ana Foothill HS (CA) from 1969 until 1973, before joining the collegiate ranks as the offensive coordinator at Austin College (1974-1975). Snyder then joined Hayden Fry’s staff at North Texas (1976-1978), and when Fry was named head coach at Iowa in 1979, Snyder followed him as the offensive coordinator and quarterbacks coach for the Hawkeyes (1979-1988). In 1989, Coach Snyder took over the program at Kansas State and led one of most successful turnarounds in college football history until he announced his retirement in 2005. After three seasons, Snyder returned to the sideline for the Wildcats in 2009. This season is his 27th leading the program.

Coach Casey is a second-year head coach at St. David’s School in Raleigh, North Carolina. He is a former letterwinner at Davidson College and a member of the 2013 Allstate AFCA Good Works Team®. St. David’s competes in eight-man football, and this season they are 8-0 and are preparing for their state championship game on November 2.