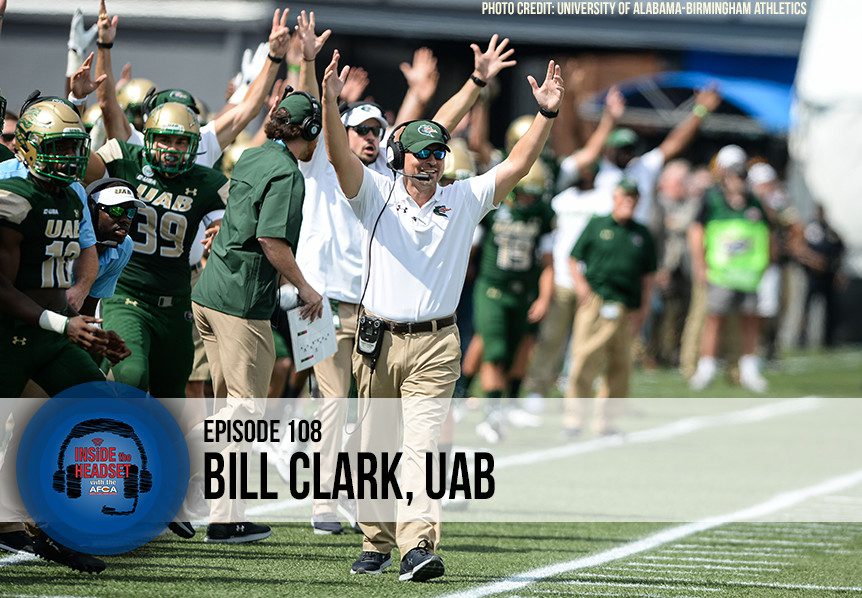 This week on Inside the Headset we speak with Bill Clark, Head Coach for the University of Alabama–Birmingham. We discuss the process of bringing back the UAB football program in 2017, a unique partnership with the Children’s Harbor Family Center, and his high school coaching days in Alabama.

Coach Clark’s career began as an assistant at Piedmont HS (AL) in 1990. After two seasons, he was named defensive coordinator at Tuscaloosa County HS (AL) (1992-1994), and he also went on to serve as the DC for Coffee HS (AL) (1995-1996), and Dothan HS (AL) (1997-1998). In 1999, Clark was named the Head Coach from Prattville HS (AL), where he had a combined record of 106-11 and collected back-to-back state titles during his nine years there. Coach Clark jumped to the collegiate level in 2008, joining the staff at South Alabama as the defensive coordinator (2008-2012), and he was the Head Coach of Jacksonville State for one season (2013). In 2014, Coach Clark took over the UAB football program, but after one season, the school announced the program would be eliminated. In the summer of 2015, it was announced the program would be reinstated, and Clark has led the Blazers to back-to-back bowl games since their return in 2017.

This week, it IS about playing for the name on the back.

What does @UAB_FB @ChildrensHarbor game mean to the patients and players? Today, 10-year-old Landon Symasek was reunited with former WR @C_lisa13 , who he was paired with in 2017. Over the past 2 years, the two have kept in touch, but today was special. 💕@WBRCnews #GoBlazers pic.twitter.com/wDoNtWTkbF