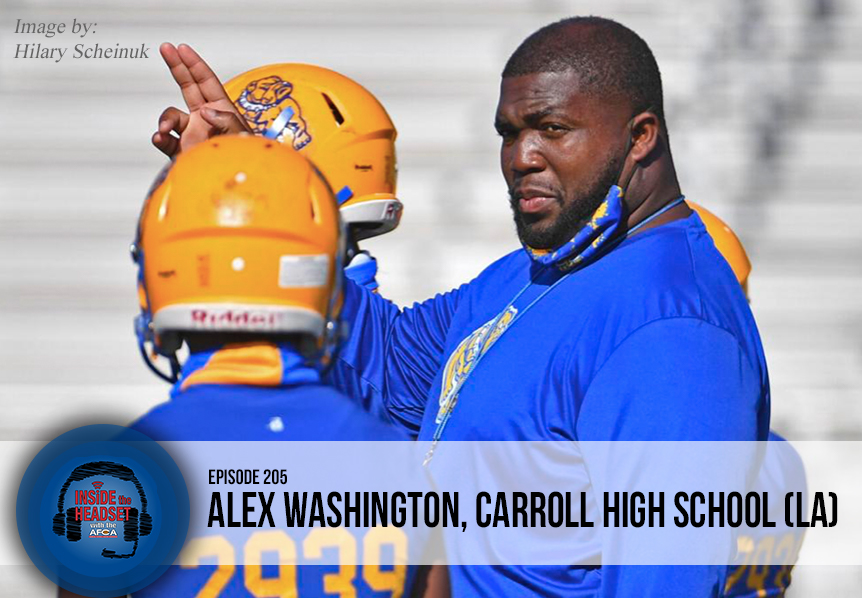 This week on Inside the Headset, we are featuring Carroll High School Head Coach, Alex Washington. Coach Washington highlights his experience transitioning from player to coach, shares lessons he learned while working as a Graduate Assistant, and discusses his methods on how he keeps his players accountable on and off the field.

Alex Washington is entering his fourth season as the Head Coach of Carroll High School in Monroe, Louisiana. This is his fifth season overall coaching at Carroll since beginning as an assistant coach in 2017. Prior to Carroll, Coach Washington spent two seasons at Bastrop High school (LA) as an assistant coach under head coach Brad Bradshaw. Before transitioning to the high school level, Coach Washington spent two seasons at Division II Livingstone College (NC). Washington got his start in the coaching world from AFCA Executive Director, Todd Berry when he hired him onto his coaching staff at the University of Louisiana-Monroe as a Graduate Assistant in 2012.

Coach Washington is no stranger to Carroll High School, having played for the Bulldogs from 2003-2006. Washington had a decorated high school career where he was an All-State Offensive Linemen and a highly touted recruit. He ended up signing with the University of Ole Miss where he played in 38 games and helped lead the Rebels to two Cotton Bowl victories during his time in Oxford.